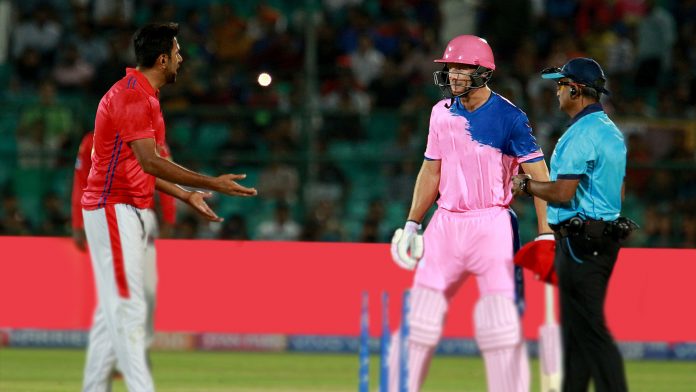 The matches in Indian Premier League are incomplete without a little controversy, scuffles and some heated arguments. Well, the 12th edition of the event witnessed its first controversy during the 4th match of the season, between Kings XI Punjab and Rajasthan Royals, on 25th March 2019. The visitors, KXIP defeated Rajasthan Royals by 14-runs, but the event that caught entire attention of people was Jos Butler’s controversial dismissal.

The game started with a KXIP posing a terrific target of 184 for four in front of Rajasthan Royals. The #HallaBol defenders tried every possible trick to overcome the posed target & get away with a victory in the game.

Chris Gayle, who played a magnificent inning, scored a total of 79 runs off 47 covering around eight boundaries and four sixes, helping Punjab attain a strong position in the game. On the other hand, Rajasthan Royals’ captain, Ajinkya Rahane and Jos Buttler helped the team make a stable start, partnering for 78 runs in just 8 overs. However, soon Rahane was made to head back to the pavilion after being clean bowled by Ravichandran Ashwin.

Butler, who was going strong in the game became a cause of worry for Ashwin, who then did the unthinkable and gave way to the biggest controversy of the IPL era. Ashwin took the aid of Mankading to dismiss Butler, who became the first victim of the act in the history of IPL.

It was during the 13th over of the game with Rajasthan going smooth on 108 runs, when Ashwin manked the player, by deeming him to leave the crease even before throwing the ball. Following this, Butler was announced out as per the cricket laws.

The law states, “The striker is out Bowled if his/her wicket is put down by a ball delivered by the bowler, not being a No ball, even if it first touches the striker’s bat or person.”

Following the incident, Butler had a heated argument with Ashwin for tricking him into the dirty game, before he left to the pavilion. The dismissal was legal as per the laws but has received a severe backlash from cricket fans, who believe it has hurt the invisible sportsmen spirit of the game.

Let’s see what justification will be made for Ashwin’s action, or will the outrage bring a better change in the game to avoid such happenings in the future. Till then, if you want to keep yourself fed with the latest sports updates, stay tuned to MyTeam11.