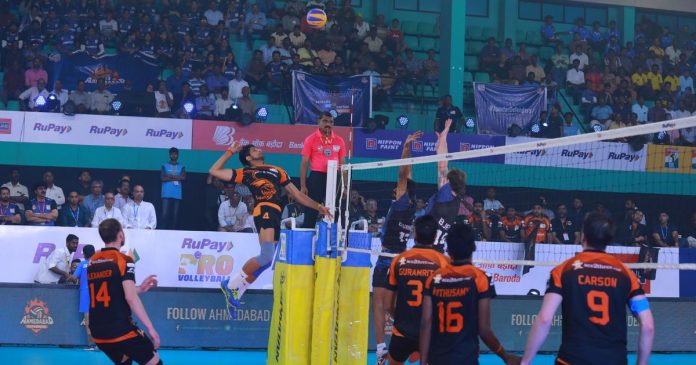 As the Pro-Volleyball league gains momentum, the team players are all pumped up to compete with the utmost passion and grit. The sports junkies are hooked on this league as the third match turned out to be an exciting treat. Scroll down to find out what the third day of PVL had in store for the spectators!

Hyderabad’s skipper Carson Clark came out as the hero by leading the front with 15 points (12 spikes, 1 block and 2 serves) whereas Russia’s Victor Sysoev from the Ahmedabad franchise bagged 12 points (11 spikes and 1 block).

The ebb and flow of this match kept the audience glued until the end. During the entire game, both the teams were striving not to give an inch to one another. Hyderabad won the toss and decided to receive first, and took the lead in the first set with 15-11. But the cut-throat competition continued as the Ahmedabad team turned the tide in their favor in the second and fourth sets.

Both the teams were racing up their scores to win. Experiencing major setback in the team’s performance, BlackHawks Hyderabad called for Super Point to level the scores after the first Technical Time Out (TTO). But this move went in vain.

Where a Super Serve from Dilip Koiwal gave Ahmedabad a lead by 11-10 and on the other hand, an error from Dilip and skipper Ranjit Singh gave away an inadvertent advantage to the opponent Hyderabad team.

This precarious battle finally went to the decider, and Captain Clark along with Rohit Kumar and Amit Kumar came out at the forefront and helped to tip the scale in favor of Hyderabad.

Though Ahmedabad tried to make a tremendous comeback, Rohit pulled things back for Hyderabad, and eventually, Black Hawks Hyderabad emerged as the winner.

The fourth match of the PVL is scheduled tonight at 7 pm in Rajiv Gandhi Indoor Stadium, Kochi and all the volleyball fans are looking forward to this thrilling face-off – Calicut Heroes vs. U Mumba Volley.

Share
Facebook
Twitter
Previous articleEmerging players from IPL 2019 that you must place your bets on!
Next article“Will Indian batting order be MSD deprived?”: Sunil Gavaskar Predicts