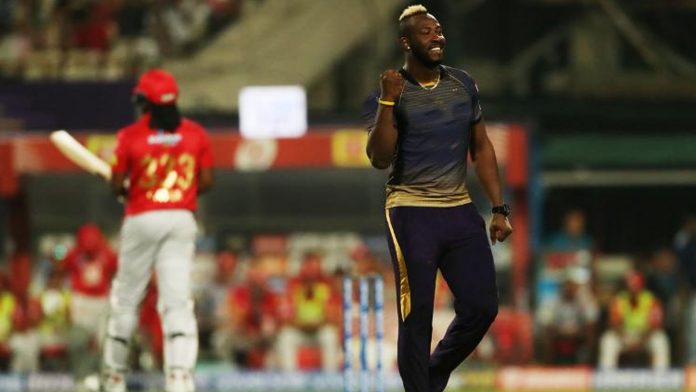 After a controversial start with the Punjab skipper, Ashwin, mankading Jos Butler, the team Kings XI Punjab toured Kolkata for their 2nd & season’s 6th match. Well, it looked like that the stars were in favor of the hosts, who registered a scintillating victory by 28 runs against the visitors.

The match started with the Knight Riders winning the toss and opting to bat first & set-up a high-end target as the Eden Gardens pitch is known for being batsmen friendly. Setting up a target of 219 runs, the Kolkata Knight Riders made it difficult for the visitors to make pace. The visitors were forced to wrap their chasing show at a total of 190 runs, at the end of 20 overs.

The game was all raining runs for Kolkata Knight Riders, Andre Russell who was in full-form became a prominent player scoring 48 runs off 17, helping KKR achieve a target of 218 runs with a loss of 4 wickets at the end of 20 overs. On the other hand, the players of Kings XI Punjab failed to answer back with the required dedication, and even David Miller failed to help the team attain a strong position in the game.

However, it was not just Andre Russell who played a significant role for the team’s victory, but two other players too became the highlight of the game. Nitish Rana & Robin Uthappa played a fantastic inning, scoring 67 off 50 balls & 63 off 34 balls, respectively.

KKR has been going strong in the 12th season of the Indian Premier League, winning both the matches played, the team stands at the top of the IPL table. The franchise will be playing its next match against Delhi Capitals on 30th March.

If you want to keep receiving the latest sports stuff, stay tuned to MyTeam11.