Match Update: India records victory in the 1st ODI against Kiwis to lead series by 1-0 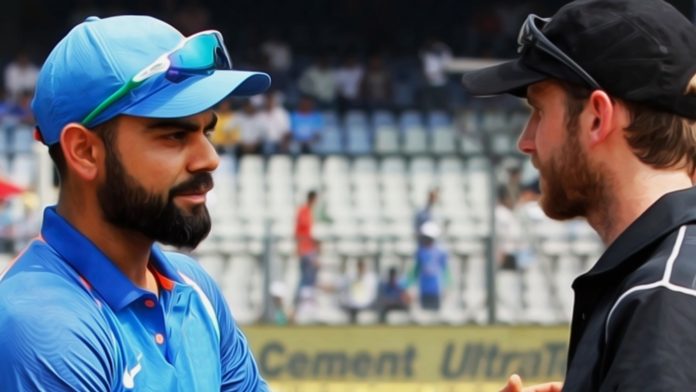 After creating havoc at the Australian soil by defeating the Aussies in their home ground, Virat Kohli and his men are now touring New Zealand. The Men in Blue will be playing a 5-matches ODI series and 3-game T20 series against the Kiwis in New Zealand.

The 1st ODI of India’s tour to New Zealand which was held on Wednesday has once again proven that Team India is now unbeatable, as the Blue Army went on to win the game to clinch a 1-0 lead in the series. Well, one of the dominating roles was played by the sun in the first game of the series as the game was stopped with the sun making it difficult for players to see the bowl.

The game which began with Kiwis batting first and setting a target of 157 runs ended with India winning the game with 8 wickets in hand. The target of 157 runs given by Kiwis, was revised to 156 runs in 49 overs by DLS method, as the match was halted due to bad weather conditions. However, team India scored a total of 156 runs in just 34.5 overs with a loss of 2 wickets.

Both, the Indian bowlers and batsmen showcased a powerful performance at the field, helping India register their first ever victory in the on-going series.

Shikhar Dhawan who opened for team India played a great inning, pulling off a total of 75 runs off 103 balls in his stack. Meanwhile, Indian skipper Virat Kohli managed to bag 45 runs off 59 balls, after Rohit Sharma was sent off the field for a score of 11 runs.

On the other hand, India bowlers, Kuldeep Yadav, and Mohammed Shami beautifully picked 3 & 4 wickets respectively. For an intrinsic performance, Mohammed Shami was adjudged as the ‘Man of the Match.’

The next ODI of the series is scheduled to be played on 26th January 2019 at Bay Oval, Mount Maunganui. Let’s wait & see what new will happen during the upcoming game. Till then stay tuned to MyTeam11 for latest sports stuff.