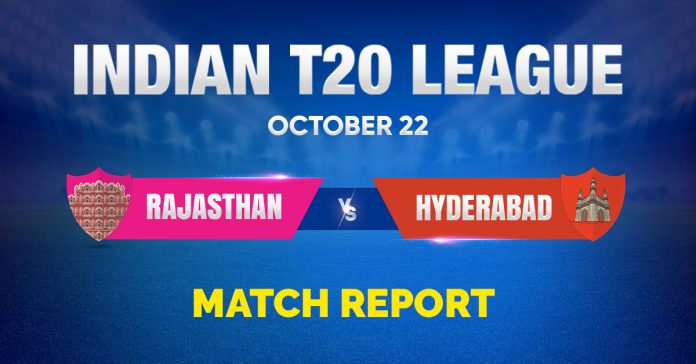 With an all-round display, Hyderabad edged past Rajasthan by 8 wickets to take the 5th spot in the table. Archer started with two early wickets but Manish Pandey guided Hyderabad home along with Vijay Shankar. With 3 more games to go, Rajasthan's playoff hopes look pretty poor now.

Rajasthan started very well but a mixed-up between both openers cost them a wicket as Uthappa went for 19. Samson looked much better tonight and added 56 runs with Stokes. In successive overs, Hyderabad picked both set batsmen to put pressure on Rajasthan. Buttler and Smith were also off the colours and it really hurt Rajasthan in last 10 overs. Parag got 16 off Natarajan’s over to set some tone. Holder picked 3-wickets haul in his first game. On a challenging surface, Rajasthan fell short of 15 runs. With Archer’s last-ball six guided Rajasthan to get 154.

Jofra Archer gave a fine start to Rajasthan with picking Warner and Bairstow early in the powerplay. Manish Pandey took the charge and he constructed the chase with Vijay Shankar. Pandey completed his fine half-century. He batted with a good strike rate which helped Hyderabad to remain in the game. Shankar took time to settle but he also delivered a good knock in the end. Vijay Shankar also completed his half-century. The duo took the game away from Rajasthan with a match-winning stand of 140 runs.

Manish Pandey is our star performer of the match. Hyderabad was in big trouble after losing their both openers on 16. Pandey took time to avoid pressure and later, smashed the weak ball out of the boundary. With a strike rate of more than 150, Pandey played a fine knock of 83 off just 47 balls to guide Hyderabad a much-needed win.

Top 5 players who made an impact in the game