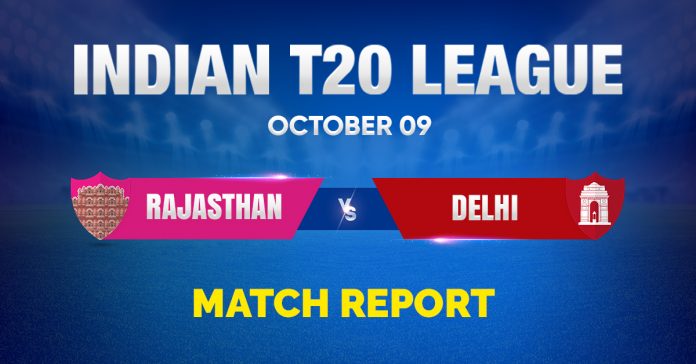 Nothing changed in Delhi’s winning streak and Rajasthan’s losing streak. The Sharjah couldn’t revive Rajasthan as the Pink outfit lost their 4th consecutive game and Delhi took the top spot one more time.

Delhi didn’t get a good start as they lost Dhawan early and in hurry, Prithvi Shaw and Iyer also lost their wicket to see Delhi at 50/3 in the powerplay. In middle-overs, Delhi needed one player who can take the charge and Hetmyer showed some intent with 24-balls 45 but Rajasthan still controlled the game. Apart from Tye’s 22 runs in 19th over, Rajasthan did a good job to restrict Delhi to 184. Archer went for just 24 and picked 3 wickets. Tewatia was also economical with conceding just 20 runs from 4 overs, including a wicket.

In the chase, Rajasthan lost Buttler early. Smith and Yashasvi Jaiswal put a steady stand and the run-rate pressure cost Rajasthan Smith and Samson in back-to-back overs. The young Jaiswal scored gritty 34 under pressure. Iyer used Ashwin in the powerplay and he went for 22, picking two wickets. The middle-order exposed one more time and Delhi took the grip in hand. Rajasthan played like a mediocre side in the chase. Tewatia played some good shots to reduce the losing margin.

Marcus Stoinis is our star performer of the match for his all-round game. When Delhi was struggling at 50/3, Stoinis played a sheet anchor with scoring vital 39 runs off 30 balls. With the ball, he scalped Samson and Jaiswal to set the tone for Delhi.

Top 5 players who made an impact in the game