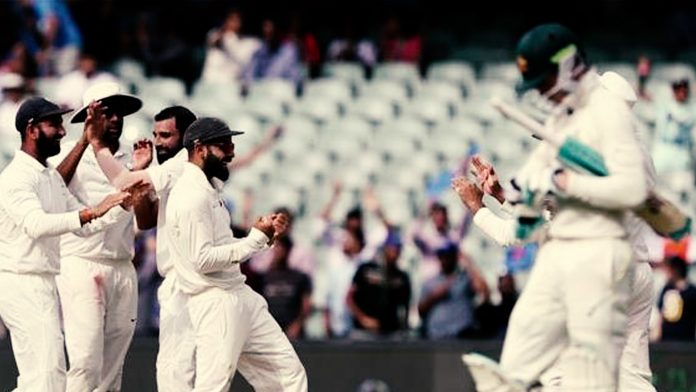 The first test of India vs Australia series witnessed the Blue Army starting as slow as a turtle against the Aussies, with the entire team reaching a total score of 250 runs. The match looked to slip-off India’s hands in the first inning itself as the renowned players of the team, “Hitman” Rohit Sharma, Captain Virat “King” Kohli, etc., failed to create a magic on-field.

Moreover, the tradition wherein team India never won a Test against Australia at the Down Under, in the past 10 years, seem to continue with India set to lose another test by starting very slow. However, things took an unexpected turn when India registered a 31 run victory against the Baggy Greens to lead the series by 1-0. The last time these Men in Blue defeated Australia at their home ground was back in the year 2008, and it was in the year 2003 when India last registered a victory at Adelaide.

Indian player Cheteshwar Pujara who won the Man of the Match title acted as one of the crucial players for the team when Rohit Sharma and Virat Kohli missed registering high scores on the field. Pujara scored 123 and 71 runs in the 1st and 2nd innings, respectively.

Pacers Mohammed Shami and Jasprit Bumrah helped India greatly in clenching the long-awaited victory, by pulling-off 3 wickets each in the second innings. Further, bowler Ravichandran Ashwin additionally picked 3 wickets in the final innings of the game to help India get through the victory chase.

The Australian players Shaun Marsh and Tim Paine (c & wk) made great contributions to the team’s scoring by hammering a total of 60 & 48 runs, respectively. Also, the Down Under stars Pat Cummins & Mitchell Starc left no stone unturned to help their team but failed to surpass Indian bowlers & departed with a total of 28 runs each.

The game was a roller coaster ride for both the teams & everyone felt India will lose yet another game in Australia. But to everyone’s surprise team India turned tables this time to register a historic Win at the hosts’ home ground, leading the series by 1-0. Let’s see what new we will get to witness in the 2nd test of India’s Tour to Australia, to be held on 14th December 2018. Till then stay tuned to keep receiving latest sports updated.