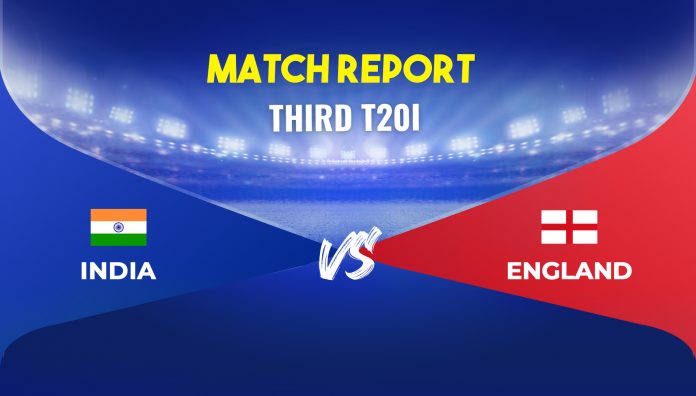 The poor batting show in the first ten overs proved costly for India as late fire from Kohli overshadowed by Jos Buttler to set a clinical victory for England. India have to win the fourth T20I to avoid the first T20I series loss after two years.

India off to another dull start as KL Rahul got his second duck of the series. Mark Wood picked another wicket by picking Rohit Sharma. Last match’s hero Ishan Kishan got out on just 4 to leave India struggling at 24/3. India recorded their third-lowest powerplay score in T20Is. Pant and Kohli constructed the innings after early blows. Pant got run-out after a good start and Wood also picked Iyer to scalp his third wicket.

Kohli took the charge when India needed acceleration and it started with Mark Wood’s 18th over when he smashed three back-to-back boundaries to him. Kohli completed his 27th T20I half-century. Pandya also joined the party and smashed England out of the park. Kohli’s strike rate was just 96 from the first 25 balls and after then, he scored runs at the strike rate of more than 200. In the last three overs, India scored 42 runs to get an imposing total of 156. Kohli remained not out on 77.

Indian pacers bowled some tight overs in the start and Chahal got Roy after 13-balls 9. Jos Buttler was in a different mood tonight. His strike rate hurt the Indian side and he completed his 11th T20I fifty. Washington Sundar provided a breakthrough with the wicket of Malan. Indian bowlers looked clueless against Buttler. The run-rate was in control of England and Bairstow joined Buttler to finish the job. England made this chase a cakewalk in the end and took a vital 2-1 lead in the series.

Jos Buttler is our star performer of the match. He scored his 7th T20I half-century as an opener, 11th overall and didn’t allow Indian bowlers to put pressure in the chase. He played a match-winning knock of 83 runs off 52 balls.