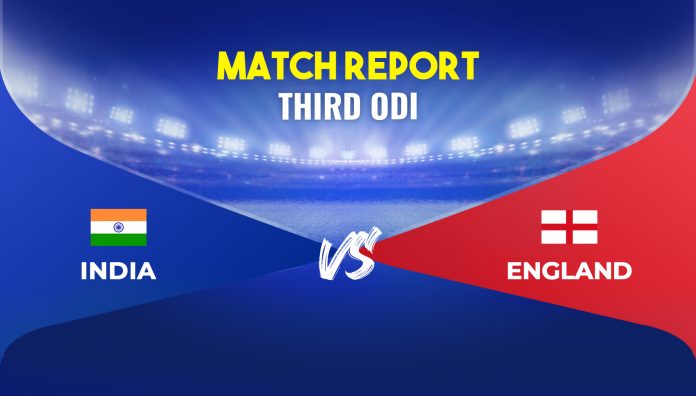 A commendable bowling display helped India to defend 329 runs in the final ODI and Kohli’s troops won the ODI series 2-1. In the first innings, Pandya and Pant took India to 329 and the pace duo Bhuvi and Thakur did rest of the job.

Indian openers provided a good start and added 103 runs for the first wicket. Shikhar Dhawan scored a fine half-century. India struggled against the spin and lost three wickets in the margin of 18 runs. Pant looked better but Livingstone trapped KL Rahul on 7. Hardik Pandya and Pant took the game away from England with a 99-run stand. Both batsmen scored half-centuries. Sam Curran broke the blistering stand and Pandya also got out on 64. Krunal and Shardul played some attacking cricket to take India 300. India couldn’t survive more and bowled out on 329.

India off to a fabulous start with picking both openers in the first three overs. Ben Stokes looked dangerous when Hardik dropped a sitter but he couldn’t add more runs when Natarajan picked him. Jos Buttler also lost his wicket after a successful DRS. Malan and Livingstone added vital 60 runs for the 5th wicket but Thakur sent both in the pavilion in successive overs. India bowled tight overs to keep England silent but Sam Curran become a dangerous batsman who put a solid partnership with Wood. In the end, India emerged victorious by 7 runs. It was India’s first ODI series win after January 2020.

Bhuvneshwar Kumar is our star performer of the match. He played a vital role to defend 329 on a batting track. Bhuvi picked two important wickets of Jason Roy and Jonny Bairstow. In his second spell, he also got Moeen Ali.