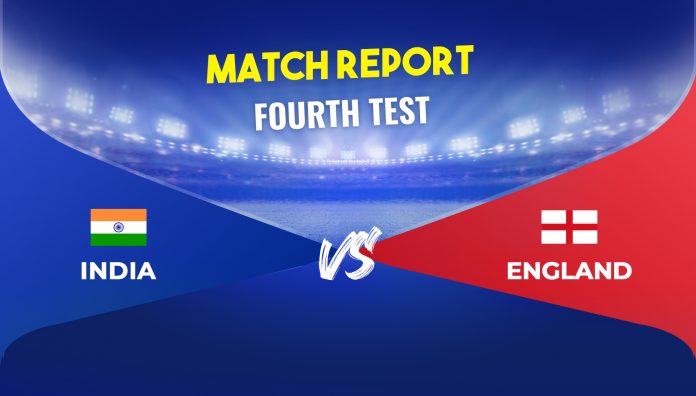 Team India bounced back hard after the defeat in the first match and outplayed England in the next three Tests by huge margins to grab the series 3-1 and WTC Finals qualification. India won the fourth Test by one innings and 25 runs, courtesy of spin brilliance from Axar and Ashwin, following by Pant and Sundar's masterclass.

Axar Patel struck early and sent both openers in the pavilion to leave England two-down on 10. Siraj picked the big wicket of Root before the gritty stand of Bairstow and Stokes. Siraj picked Bairstow on 28 and Stokes completed a fine half-century. Washington Sundar scalped Stokes on 56. Ollie Pope and Lawrence looked better but couldn’t convert the start into big. Ashwin picked Pope and also sent Foakes into the pavilion. Axar Patel came back and picked two wickets in one over. England were bowled out on 205 and crossed the 200-mark after 5 innings. Axar Patel picked four and Ashwin grabbed three.

India were allowed to bat for 12 overs and Anderson picked Gill on a 3-ball duck. India finished the first day with 24/1 with Rohit and Pujara in middle.

India lost Pujara when the pitch was favouring the spin. Ben Stokes bowled very well and the pressure paid off when he got Virat Kohli on a duck. Rahane looked solid and looking for runs but he couldn’t convert the good start and Anderson grabbed him on 27 to leave India 80/4 at lunch. Stokes got Rohit and Leach picked Ashwin to see India struggling at 146/6. In the final session, Pant and Washington Sundar put a fabulous stand of 113 runs. Pant scored his maiden Test hundred at home and Sundar got his third Test half-century. India finished Day 2 on 294/6.

Axar Patel and Sundar contributed vital runs in the first session. They added 106 runs for the 8th wicket. Sundar missed out his maiden Test ton by just 4 runs and India were bowled out on 365 with a lead of 160 runs.

The extra pressure hurt England in their 2nd innings and spinners started taking wickets from the 5th over of the innings. Bairstow got his third duck of the series and with the wicket of Root, England were struggling at 65/6. Lawrence showed some fight to get his half-century but regular wickets haunted the English side and they bowled out on 135. Axar Patel bagged another 5-wickets haul of the series and Ashwin finished with his 30th test fifer.

With this victory, India moved to the number one spot in World Test Championship and qualified for the finals. They also won the series 3-1.