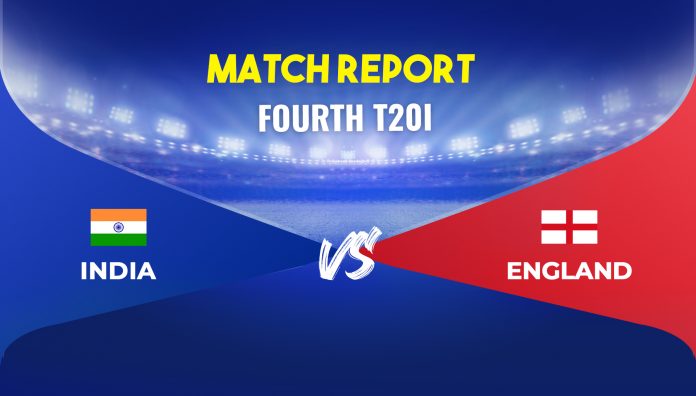 Team India bounced back in the fourth T20I to defend 185 with disciplined bowling. Suryakumar Yadav scored a fine 57 and Iyer finished with 18-balls 37 but credit goes to bowlers who bring India back into the series. The series is now leveled with 2-2 and the decider match will be played on Saturday.

Rohit started the innings with a first-ball six but Jofra picked him in the 4th over. Suryakumar Yadav came to bat at number three and he looked solid. India got a good partnership and Stokes broke it by claiming the wicket of KL Rahul. Virat Kohli got out on just 1 and India lost their third wicket at 70. Surya scored his maiden half-century and he made a fine 57 after an unlucky dismissal.

Iyer started with a fine four off Sam Curran. After 15 overs, India were 128/4, and acceleration was required from both Pant and Iyer. Iyer provided the big boost to India in death overs by scoring a quick 37 and India finished on 185.

Bhuvneshwar Kumar got last match’s hero Buttler in his 2nd over to pick the first wicket. India bowled tight overs but Sundar conceded 17 off his first over. England finished on 48/1 in the powerplay. Jason Roy looked dangerous and in middle, Rahul Chahar struck in his first over to dismiss Dawid Malan. Roy failed to get a half-century for the third time in the series and Pandya trapped him on 40. England were restricted on 71/3 after the first ten overs.

Bairstow and Stokes put a 65-run stand. Rahul Chahar provided the breakthrough with the wicket of Bairstow. Morgan joined Stokes when England needed 55 off 31 balls. Shardul Thakur got the big wicket of Stokes on 46 and on the next delivery, he also picked Morgan to bring India back into the game. Pandya picked Sam Curran on his final delivery of the spell. Pandya conceded just 16 off his 4-overs spell and picked four wickets. India didn’t allow England’s lower-order players to attack and defended the total with ease. Jofra Archer fought hard with some late fire but India managed to hold their nerves.

Hardik Pandya is our star performer of the match. He bowled a fine spell. In his first spell, he bagged an important wicket of Roy and conceded just 11 in 3-overs. He came to bowl crucial 18th over and conceded only 5 to finish the figure with 16/2 in 4-overs. His spell changed the game in favour of India.