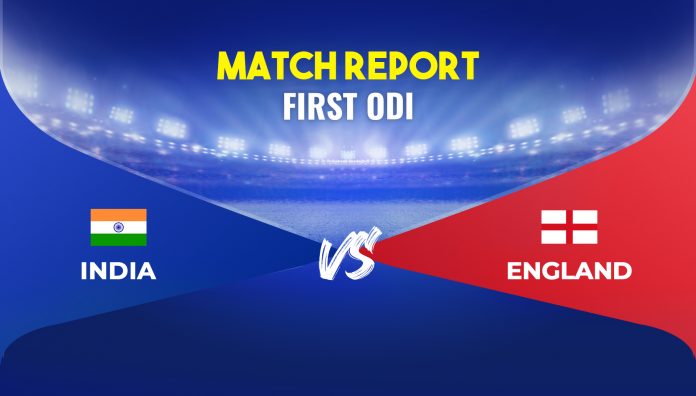 Debutant Krunal Pandya and Prasidh Krishna shined for India to win the first ODI by 66 runs against England. India have taken a 1-0 lead in the ODI series.

India lost one more toss and England opted to bowl first. Rohit Sharma and Shikhar Dhawan avoided any blow in the first powerplay. Stokes provided the breakthrough when he got Rohit Sharma 28. Dhawan looked solid and completed his third consecutive half-century. Kohli and Dhawan added 105 runs for the 2nd wicket. Kohli scored his 61st half-century but couldn’t convert it into a hundred as Moeen Ali picked a catch to dismiss him on 56. Shreyas Iyer also got out in search of a big shot and Dhawan also missed out a well-deserved hundred by 2 runs. India required an acceleration but Stokes scalped his third with the wicket of Hardik Pandya. India lost the momentum in the second half of their innings. Krunal Pandya joined KL Rahul and we saw a fine partnership between the two. Both completed their half-centuries and helped India to get 317 in 50-overs. They added 112 runs for the 6th wicket off just 61 balls.

England’s start was pretty high and Bairstow smashed 22 runs off Prasidh Krishna’s over. Both openers played intense cricket and Prasidh Krishna broke the 135-runs stand with the wicket of Roy. Prasidh Krishna picked Ben Stokes also to bring India into the game. His second spell did wonder to India and England played some tight overs in the middle. Shardul Thakur got Morgan, Bairstow, and Buttler in his successive overs to leave England struggling at 176/5. Good run-rate kept England in the hunt but they lost regular wickets. Lower-order couldn’t sustain and England bowled out on 251. India took a 1-0 lead in the series.

Prasidh Krishna is our star performer of the match. He went for 37 runs in his first spell but in the second spell, he opened the doors for India. He provided the big breakthrough to India after a 135-run stand from Roy and Bairstow. Krishna went for just 17 in his second spell in 5.1 overs to claim a 4-wicket haul in his debut match.