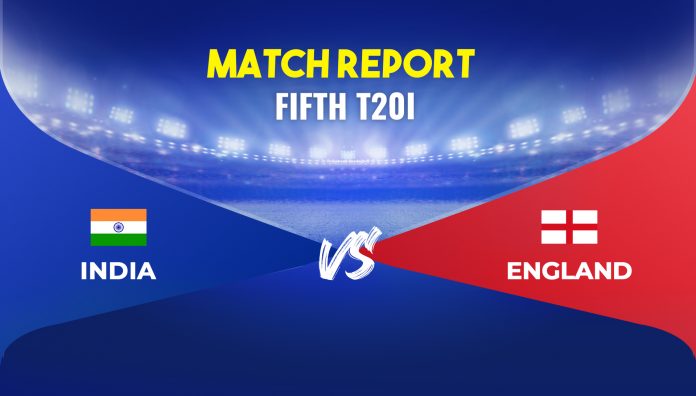 Team India outplayed England in all departments to win the T20I series 3-2, thanks to the Virat-Rohit show, followed by a late batting collapse from England.

Kohli and Rohit started the innings for India after losing the toss. The opening duo put a solid stand for India and avoided any blow in the powerplay. Rohit got his half-century and Stokes broke the 96-runs stand after picking Rohit on 64. Suryakumar Yadav joined Kohli and India continued their domination. Kohli got his 28th T20I half-century, the third of this series. Adil Rashid picked the wicket of Surya, thanks to a stunning catch of Roy-Jordan. Pandya and Kohli charged India to 200. Kohli remained not out on 80 and Pandya scored 39 off 17 balls. India got 224 on board which is their highest T20I score against England.

Bhuvneshwar Kumar the early wicket of Roy on duck but Malan and Buttler smashed Indian bowlers to take England 62/1 in the powerplay. They crossed the 100-run mark in the 10th over and at the half-way mark, England required 121 in the last 10 overs. Malan and Buttler both completed their half-century to keep England in the hunt. Bhuvneshwar provided the big breakthrough after getting Buttler on 52. back-to-back tight overs brought India into the game. Thakur picked Bairstow and Malan in the same over to end the hopes for England. India didn't allow England to score boundaries in death-overs and win the series 3-2.

Virat Kohli is our star performer of the match. The Indian skipper opened for India and kept the run-rate high. He scored his 28th T20I half-century and remained not-out on 80 off just 52 balls. His match-winning knock helped India to win the series 3-2.