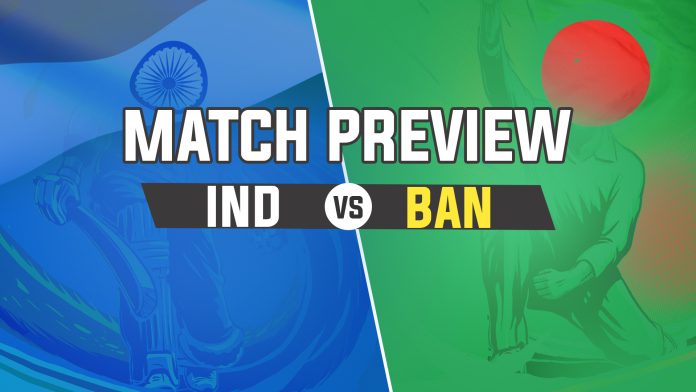 The second test between India and Bangladesh is around the corner, and both the teams have been seen sweating-off in the nets to get ready for their first-ever encounter with the Pink Ball. The game is already the talk of the town as it will mark day-night test debut for both the teams at the Eden Gardens, Kolkata on November 22.

The first game of the 2-Tests series turned out to be a huge disappointment for the visitors as the players failed to perform, losing the game by an innings and 130 runs. Bangladesh won the toss and opted to bat first planning to put up a big score on the board, but as the destiny had it they bundled up at a mere tally of 150 runs. The second innings wasn’t impressive either, as they could only manage to pull off 213 runs before Indian bowlers showed the entire Bangladesh time the way back to pavilion.

As if the odds weren’t bad enough with two of the most crucial players of Bangladesh, Shakib Al Hassan and Tamim Iqbal unavailable for the tournament, another Bangladesh player has been ruled out of the Kolkata Test. Saif Hassan, the 21-year-old reserve batsman from Bangladesh, who was looking forward to making his debut during the second game, has been ruled out after he split his fingers webbing during the 1st Test.

Bangladesh openers failed to perform in the 1st test as they could only 24 runs combined from the two innings. Bangladesh was in dire need of change at the top, but with Hassan being ruled out, they are now left with the option of picking the same openers.

From India, it was Mayank Agarwal who outshined as the ultimate star, scoring his second Test double century, he knocked a massive 243 off 330 balls. Other than him, it was Rahane who performed well with the bat. Cheteshwar Pujara who looked a bit off during the South Africa encounter is back to his good batting ways as he startled the opposition with a half-century in the first game.

After registering a comprehensive victory at Indore in the first test, it is expected that the hosts will not make any changes to the playing team. There are no injury updates, and thus, we might see the same 11 as of the first test.

With an injured Saif Hassan ruled out of the Kolkata test, Bangladesh lost the chance of tinkering with the top order of the team. Thus, they shall give Imrul Kayes another chance, despite his poor performance. Taijul Islam turned out to be quite a wrong decision as he couldn’t manage to pick even a single wicket in the last game. He also gave away 120 runs at an economy of 4.29. Thus, we think that the visitors shall drop Taijul and pick Mustafizur Rahman instead for the upcoming game.

Players to Watch Out for

The right-handed batsman put the field on fire with his blistering performance in the first test. Playing an inning of a total of 243 runs that included 28 boundaries and 8 sixes, the player scored his second Test double century. He was the one who laid the foundations of the Indian batting line-up.

Mushfiqu Rahim turned out to be the saviour who gave support to the falling line-up of Bangladesh. When most of the players faced a hard time staying on the field, the keeper-batsman from Bangladesh played two crucial knocks of 43 and 64 runs in the first and second innings respectively. The player will be seen performing well in the upcoming match too.