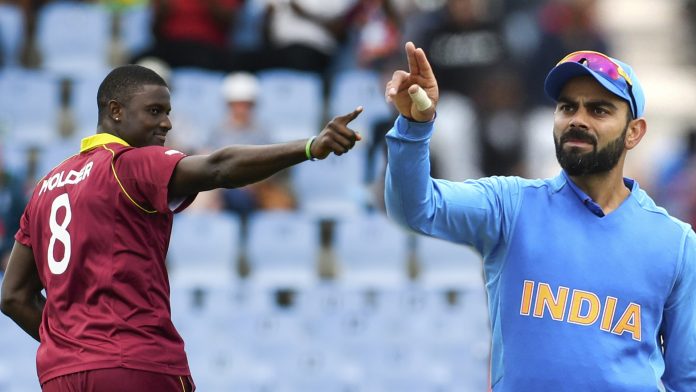 Indian team received a lot of criticism after their defeat in the World Cup semifinal against New Zealand. After displaying exceptional performance in the T20 series, this will be Team India’s first One-Day game since the horrific defeat suffered in the World Cup semi-fianls, and Virat Kohli’s side will be eyeing for a belligerent start.

West Indies, on the other hand, didn’t have an impressive outing in England & Wales as the team only managed to emerge victorious on two occasions in their nine games. The team also lost the T20 series by 3-0. With the captaincy baton handed over to Jason Holder for the 50-over series, he will be aiming to turn the fortunes in team’s favor.

The Guyana track is usually good to bat on. As this is a 50 over the game, the batsman can take some time to settle themselves because striking will become easy for the batsman who will spend time. Apart from this, the ball is expected to come onto the bat quicker than usual.

The reports coming from Guyana suggests that weather will be a primary concern ahead of this match. Thunderstorms are predicted throughout the week. There is a prediction for rain showers amid the game. Thus, it can be a rain curtailed game. The temperature will hover around 29 degrees Celsius, and humidity will be on a higher side.

This will be Chris Gayle’s last One-Day series, and he will be eyeing to showcase his vintage performance in the series. Although his record against India has not been good ‘the Universe Boss’ can still destroy even the best bowler on his day. Evin Lewis is expected to be his opening partner.

The eyes will be on the left-handed batsman, Shimron Hetmyer who failed to deliver in the T20 series. Besides him, Nicholas Pooran looked in great touch in the T20 matches but was unable to convert the start into big scores. So, this time he will look to play big innings to help the team to register colossal total. Skipper Jason Holder may well be tempted to play Carlos Brathwaite in the first ODI to strengthen the team balance.

Like World Cup, Sheldon Cottrell and Oshane Thomas will be most probably the two-seamers for West Indies in the match

Rohit Sharma grabbed the attention of entire cricket fraternity with his sensational performance in the World Cup. In the tournament, he became the first batsman in World Cup history to score five centuries in a single edition. He looked in great touch in the T20 series against West Indies as well.

Though the Indian skipper Virat Kohli may not have scored a hundred in World Cup 2019, but the No. 1 ODI batsman will be keen on hitting the refresh button in the first match of the series. Shikhar Dhawan who suffered from thumb injury against Australia in the World Cup will once again open the innings with Rohit Sharma.

Bhuvneshwar Kumar, Khaleel Ahmed and Navdeep Saini might oversee the pace department while Yuzvendra Chahal may be seen bowling his googlies in the match

Player to vouch for-

Head to Head in One-Day Internationals