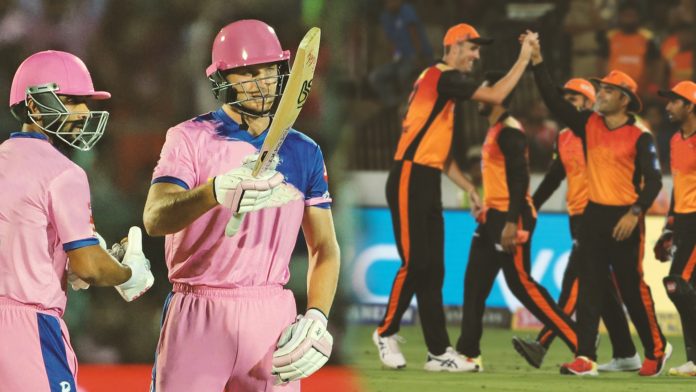 Rajasthan Royals who’ve been in the news for all the controversial reasons since the beginning of the season will be facing Sunrisers Hyderabad for their 2nd match. In the upcoming match of the 12th season of Indian Premier League, both the RR & SRH will eye on their first victory of the season, after losing their opener matches against KXIP & KKR, respectively.

The 8th match of the season will be held at Rajiv Gandhi International Cricket (Visaka) Stadium, Hyderabad. The pitch is a flat track & works greatly in favor of the spinners. Even in the short format of the game, the spinners enjoy bowling at the ground, tossing a bit more with a great bounce. Rajasthan and Hyderabad have met at this ground a total of two twice where Rajasthan failed to register even a single victory.

Sunrisers Hyderabad will be playing the game at their home ground and are expected to have a better hold at the game, looking at their previous records. Talking about the playing members of the team, then, Kane Williamson, the last year’s Orange Cap holder, will make a comeback. Kane was rested for the previous game following an injury, but now as per the reports, the player will feature in the upcoming game.

Let’s see what the upcoming game has in store for both the teams, who will earn their debut victory of the season & who’ll taste another defeat. Stay tuned to MyTeam11 & keep receiving the latest sports updates.