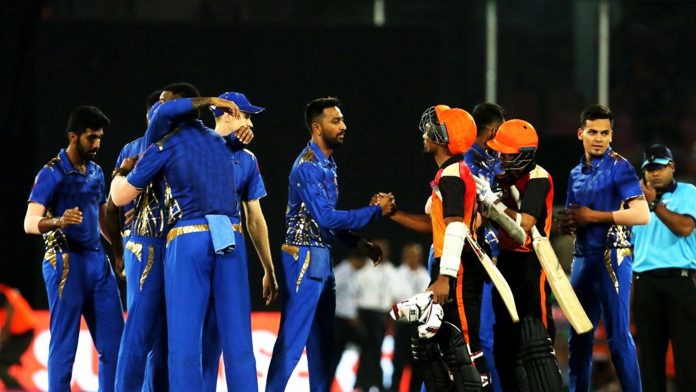 Without David Warner, Sunrisers Hyderabad will find it a little bit difficult because Warner has done bulk of scoring for the team this year. The team will like to repeat their last year‘s performance in the rest of their matches left. While Mumbai, playing at their own backyard will be aiming to win the match to become the third team to qualifying for Playoffs this season.

According to reports, the temperature will hover around 29 degrees Celsius throughout the match. But humidity will be on the higher side above 80 percent.

Mumbai Indians bowlers went for runs in their previous encounter against Kolkata Knight Riders. Even the best bowler, Jasprit Bumrah, had an off day against KKR. But, Mumbai even after the loss against KKR may not do any changes in their playing 11 as their team combination looks perfectly balanced. Mumbai Indians is at the third spot in the points table with 7 wins.

Talking about the team combination of Sunrisers Hyderabad, then, the team will now miss the services of David Warner who returned to his nation for World Cup preparations. So, New Zealand opener, Martin Guptill might replace the left-hander. Other than this, no changes are expected in the playing XI. Sunrisers Hyderabad is at the 4th spot in the points table with 6 victories.

Here’s Probable playing XI of both the squads

Both the teams will no doubt, give their 100 percent on the field to qualify for playoffs. Mumbai Indians on one side will be aiming to confirm their playoffs tickets after winning the match whereas Sunrisers Hyderabad, on the other hand, will get one step closer to the playoff if they emerge victorious in this match. Let’s see what happens in this crucial encounter.

Till then, Follow MyTeam11 for more information and updates about the upcoming fixtures.