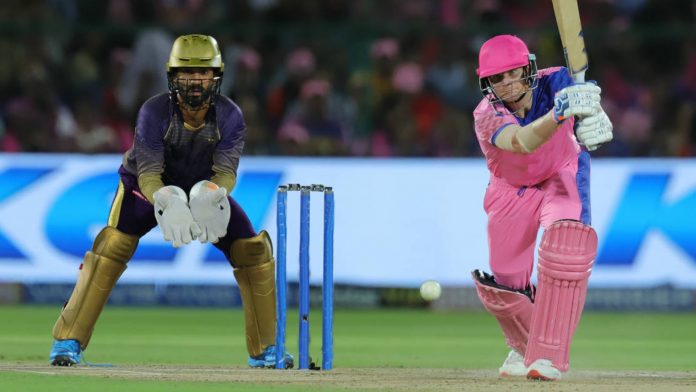 Kolkata Knight Riders, even after having the most destructive batsman, Andre Russell in their squad, they have suffered through four-straight defeats bruising their chances of qualifying for the Play-offs. While on the other hand, the Rajasthan Royals’ will have nothing to lose now, even if they win their rest of the matches, then also their chances to end the season within top 4 will be not sure.

This pitch always favors batsmen, but spinners get an advantage from this pitch. In the initial overs of the match, medium pacers will get some swing. But once a batsman gets settled, then a big score can be expected. Team winning the toss will look to field first because batting becomes easy in the second half of the match.

As far as weather conditions are concerned, it will generally be clear with a low of 26 degrees Celsius.

Kolkata Knight Riders brought Rinku Singh in place of Robin Uthappa, Prithviraj replaced the medium pacer, Prasidh Krishna and KC Karipppa got the chance in place of Kuldeep Yadav in the previous match against Sunrisers Hyderabad. But, these changes didn’t changed the fortunes of the team as they faced their fourth consecutive defeat. So, in the must-win match, KKR will go for experience. So, Kuldeep Yadav might come in place of KC Kariappa. Other than this no changes are expected. Kolkata Knight Riders is at 6th spot in the points table with only 4 wins in their bag.

This IPL season has been a nightmare for Aston Turner with three back to back first ball ducks. Rajasthan Royals will certainly drop him and bring Liam Livingstone in the squad who has played only 1 match this year till now. No other changes are expected other than this. Rajasthan Royals’ is at the last spot in the points table with only 3 wins.

Let’s see what happens in the upcoming face-off between Kolkata Knight Riders and Rajasthan Royals’. Whether Kolkata will end their losing streak or Rajasthan will keep its hopes alive in the competition. Follow MyTeam11 for more information and updates about the upcoming fixtures.