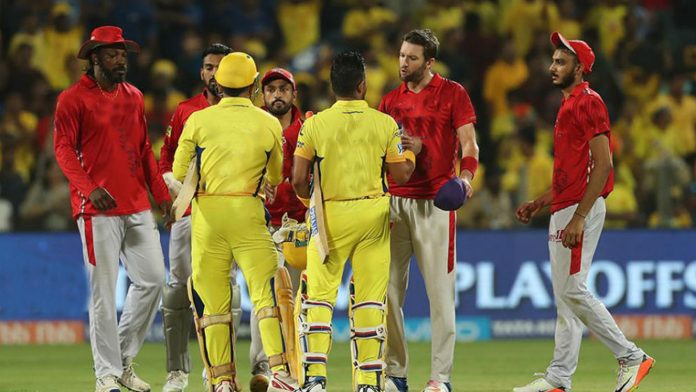 Today is the final day of the league stage, and there had been a terrific clash among 8 prominent teams to qualify for the play-offs. Chennai Super Kings who’ve already qualified for the play-offs and are standing high at the top of the points table will meet Kings XI Punjab on the field for their final match of the league stage. Punjab, after a terrific defeat in their previous match against Kolkata Knight Riders, has already been ruled out of the tournament. No matter what happens in today’s match, there won’t be any serious after-effects of the same. Let’s see what is expected from the upcoming match.

Considering the weather conditions for the match, then, the forecast seems to be quite clear. Where the temperature is expected to be on the higher note, there are no chances of rain.

Chennai players seem to be in full-form since past matches, and the upcoming match is expected to be no different. Chennai will look upon finishing amongst the top-2 by defeating Punjab in the upcoming match. Considering the mindset of the captain cool, Harbhajan Singh might not be included in the playing XI, and Karan Sharma might get a chance to play.

Kings XI Punjab after their previous loss against Kolkata Knight Riders might make slight changes to their playing XI. Andrew Tye proved to quite expensive for the team with his figures of 1 for 41 runs, and thus, the team might replace him with Hardus Viljoen.

Probable Playing XI for the Teams

Players to look for-

Let’s see what does this dead-end match has to offer to the IPL fans. As already mentioned the results won’t matter much Chennai is already through the play-offs & Punjab already out. However, it’ll be a delight to see whether things will end in a victory for Punjab or they’ll bid their final adieu with a defeat.

Stay tuned to MyTeam11 for the latest sports updates and fixtures.