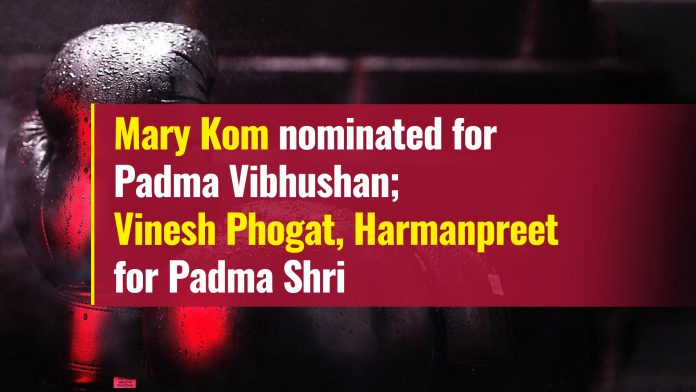 The list also includes the names of wrestler Vinesh Phogat, Tennis player Manika Batra and cricketer Harmanpreet Kaur for as the nominees for the Padma Shri award.

The Sports Ministry has recommended a total of 9 female athletes for receiving the Padma Awards. The other athletes recommended for the Padma Shri Awards include captain of the women's hockey team Rani Rampal, shooter Suma Shirur, and mountaineer twin sisters, Tashi and Nungshi Malik.

However, as per internal sources the names are yet to be finalized by the Sports Minister Kiren Rijiju. The name, once presented and finalized by Kiren, will be then presented in front of the Padma Awards Committee of the Ministry of Home Affairs and the name of athletes selected for receiving the awards will be announced on the eve of Republic Day, 2020.

Previously, Mary Kom has been awarded the Padma Bhushan, Padma Shri, and Arjuna award in the year 2013, 2006, and 2003, respectively. On the other hand, PV Sindhu was awarded with Padma Shri in 2015.

The all-women athletes list was updated with the names of wrestler archer Tarundeep Rai, hockey Olympian MP Ganesh being added to the list of recommendations.

Stay tuned with MyTeam11 for all the latest sports stuff, match predictions, and reports.