Marvel’-ous Men: What if Cricketers were a part of the Avengers Series? 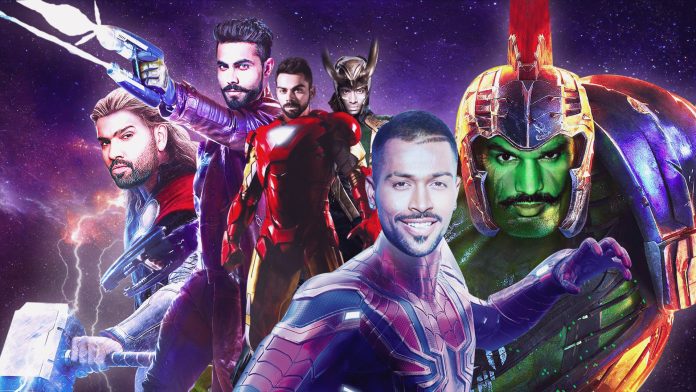 With “We Love you 3000,” "And I am Iron Man," and “AVENGERS! ASSEMBLE!" doing the rounds, we all know that a beautiful era has come to an end with the latest release of Marvel Cinematic Universe, “Avengers: Endgame.” To salute the series for making our childhood awesome & becoming an essential chapter of our life, here we are, refreshing those good old memories. Have you ever wondered what would’ve happened if the Heroes from our National Cricket team were a part of the Avengers series? Well, we did and here are our imaginations, read on:

“The Leader” that can sail any ship through any storm. The angry young man of the Indian Men’s Cricket Team, Virat ‘King’ Kohli, is known for creating a havoc on-field with both his performance with the bat & his aggression. Looking at his aggressive and risk-taking behavior, the player seems to be an ultimate fit for the heroic character of the series, “Ironman.” The way Tony Stark says, “Following is just not really my style.” The quote holds true in case of the player who is competent with the finest leadership skills & might lead India to the win another World Cup Trophy in the upcoming championship.

Famous for the recent mankading episode, Ravichandran Ashwin has been ripped off the good books for a lot of people. While not wrong as the per the binding laws of the game, the mankading act was against the spirit of the game, resulting in making Ashwin a Meme material. Comparing the player with one of the characters of the Marvel comics will not be tough, as he and “Loki” have a lot in common. Both of them are clever and know how to get things done for victory, either by hook or by crook, but never get to see the positive results.

A controversial suspension, an aggressive comeback, and a chilled out attitude is all needed to define one of the finest all-rounders of the Indian Cricket time in present time. Yes, you guessed it right we are talking about Hardik Pandya. The recent scintillating knock of 91 runs off 33 balls against Kolkata Knight Riders brought the player back in the limelight. Talking about the Marvel version of the player, then, Spiderman seems to be a fit. Both of them are young & talented and have miles to go if provided proper guidance. They are capable of turning their inexperience into their strength with the right tricks in hand.

Ro-Hitman Sharma, the player, known for scoring double centuries and making opponents feel going weak at the knees, is a perfect adaptation of the Marvel hero known to be the most morally worthy of all. Just like Thor, this Sharma Ji ka Beta can make people shed blood tears on the field with his hard-hitting performance. Both of them are capable of doing things that normal people can’t and always has a crucial role to play in the team’s victory.

You can take a leader out of captainship, but not the leadership skills. The same goes for the Indian team’s former skipper, MS Dhoni. No matter how old he gets, or if he’s no longer the captain of the team, he’ll always remain the “Captain Cool” for his fans and teammates. The ability to remain all calm when things are falling apart, to take decision best in favor & to lead people towards success makes him Captain America’s counterpart. Both Captain Cool & Captain America are born leader, bearing qualities like a cool and calm mindset & capabilities of leading their team in every situation.

The Green Man of the Avenger Army, “Hulk,” and the Gabbar of the Indian cricket team are a go-to-go combo. In a way Hulk rarely shows up on the Big screen, but is always present to back-up his team whenever needed, with his smashing moves, Dhawan too is always ready hit boundaries on the field. A single sentence is enough to define both Dhawan and Hulk, “They do not always make an appearance, but when they do it’s all a Smash-game.”

The man with the sexy beard (after Virat Kohli, of course, duh!!) is the last on our list. Ravindra Jadeja, the man who is often seeing running every nook and corner, is the best compared to the Avenger, Starlord. Both of them have this thing in common that they try very hard to help their team reach the pinnacle of success, but destiny plays its pranks, and they are always trolled for the team’s loss.

So, this was our list of superheroes from the Marvel cinematic world and the national players, you see making an effort on the field. Tell us what you think about these marvel heroes and our cricket heroes in the comment section below. Till then if you want to stay updated with the latest sports stuff, stay tuned to MyTeam11.