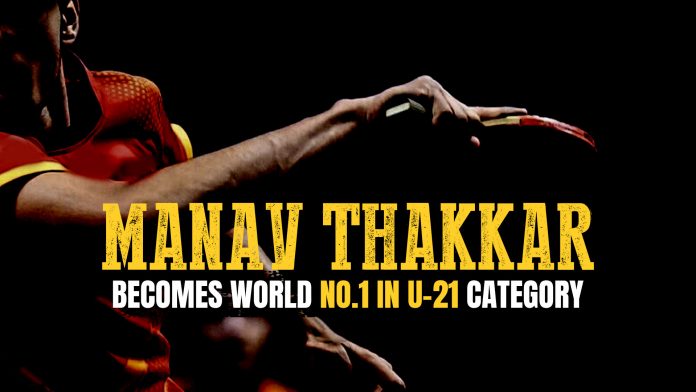 Indian paddler, Manav Thakkar, scripted history by registering his name in the record books as the first Indian Table Tennis player to be ranked World No.1 in the under-21 singles category. According to the latest rankings released by International Table Tennis Federation (ITTF), Thakkar has climbed nine places to claim the No. 1 position in the list. With 6780 points, Thakkar reigns the top spot followed by France’s Bastien Rembert on 6510 points. Surat-born tennis player is the fourth Indian to acquire this accomplishment after Harmeet Desai, G Sathiyan and Soumyajit Ghosh.

Last year, Thakkar had won the World No.1 title in the Under-18 category in February and was part of the Indian men’s team that earned a bronze medal in the 2018 Asian Games in Jakarta.

Other Indian tennis players who managed to claim a spot in the rankings are: Sathiyan has occupied 30th position in the senior category, while Achanta Sharath Kamal has jumped to 33rd spot in the world table tennis rankings. Top Indian woman paddler, Manika Batra, has also retained 61st position on the list.

The 19-year-old has achieved this feat after winning the prestigious Under-21 men's singles title at the ITTF Challenge Plus Benemax-Virgo North American Open in Markham, Canada in December 2019. He also thrashed Argentina's Martin Bentancor 11-3 11-5 11-6 to add another trophy in his bag.

Throwing light on his achievement, he said, "It feels great and I think it’s the perfect start to 2020. I hope I can continue like this and end the year on a high”.

Taking about how skating and gymnastics strengthen his performance over years, he added, “Reflexes are an important part of TT and that’s where gymnastics helped me a lot. It also helped me in maintaining posture and improving concentration, which are extremely crucial aspects of table tennis”.

“Skating helps with leg movement and agility. In skating when you turn, you need cross-stepping. In TT, when you want to reach a very long ball, you can’t use just one leg to get there. You have to make optimum use of both legs by doing cross-stepping”, he concluded.