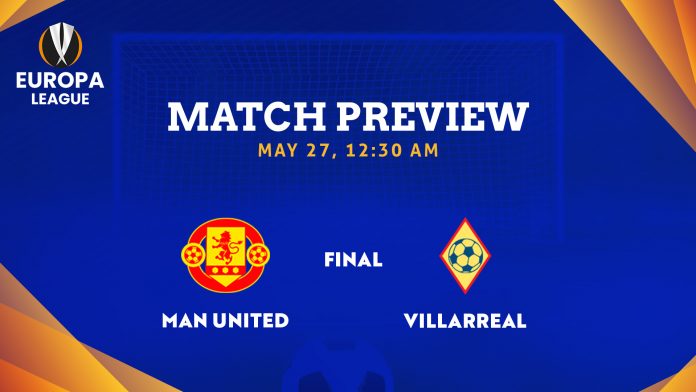 Man United will take on Villarreal in the high-voltage Europa League Final in Gdansk. United defeated Roma in the top four, while Villarreal edged past Arsenal in the semifinal.

After a competitive football season in Europe, all attention has been moved to the UEFA Competition finals. Gdansk will host the Europa League final between Man United and Villarreal. Out of four finalists in the European competition, three clubs are from Premier League. Villarreal is the only club which is from Spain.

The Yellow Submarine surprised everyone by defeating Arsenal 2-1 on aggregate in the semifinal. Manu Trigueros and Raul Albiol scored goals from the Spanish side before Nicolas Pepe's second-half goal. Gunners couldn’t avail chances in the second leg and the second leg game ended in a goalless draw. Villarreal also missed out the Champions League qualification as they lost to Real Madrid in their final Spanish Liga fixture. They can get their Champions League qualification back if they beat United in the final. Former Europa League winner Samuel Chukwueze will miss out this fixture due to injury.

Villarreal will enter as the underdogs and they can surprise the English hot favourites in the final. They have won 12 matches and drawn two out of 14 in Europa League so far. They have booked their place in the semifinal three times before and now became the 11th Spanish club to reach the Europa League final. We have seen the glorious journey of Sevilla which was also a Spanish side.

Considering the fact that Premier League clubs have lost nine finals against Spanish clubs, it would be a tough task to crack for Ole’s side. Gerard Moreno would be a key figure for Villarreal who has netted six goals and four assists in Europa League.

Meanwhile, Man United are searching for their first silverware under Ole Solskjaer. United had a great season in 2020-21 with a top-two finish but the trophy was missing from their hands. United overcame Roma in the semifinals and first leg success made the task easier. In the final top-flight game, they edged past Wolves to finish second with 74 points. There was a dip in their form in the month of May but somehow it happened due to their hectic schedule. They remained unbeaten on road through the season in the Premier League which can boost their confidence ahead of the final.

Red Devils will play Champions League next season and even they were part of UCL in 2020-21 but they failed to crack the group stage against PSG and Leipzig. Chelsea is the only English side who had won the Europa League title after dropping out of the Champions League and it happened in 2013, the last time when United won the Premier League title. The English club has won five out of seven knockout fixtures before their defeat to Roma. They have also defeated two prominent sides Sociedad and AC Milan so you can easily say United is clear favourites in the final.