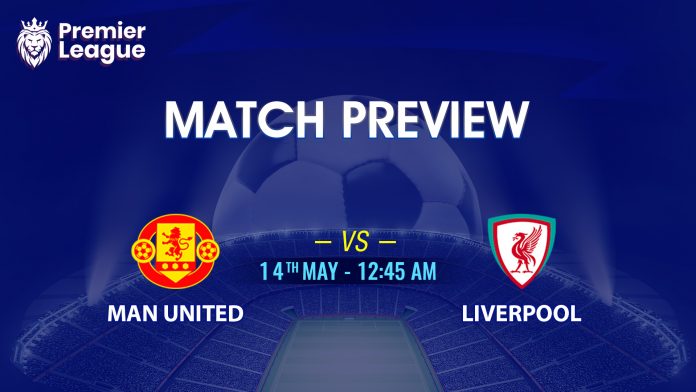 Man United’s hectic Premier League schedule continues as they will host Liverpool tonight in the rearranged clash at Old Trafford. Liverpool will look for three points to strengthen their European qualification hopes.

Man United welcome Liverpool after losing the title to Man City following their shocking home defeat to Leicester. The last four-five days were pretty hectic for United and they will play their third match without taking any big break. It cost them three points in the last game. Solskjaer made so many changes against Leicester. Greenwood equalised for Red Devils in the second half but Caglar Soyuncu’s winner in the 66th minute handed Man City the early title celebration.

Man United are 10 points behind Man City and they can only aim for a second spot which looks possible here. Chelsea’s defeat also boosted United’s top-two finish. They are now 4 points ahead of Leicester and 6 points ahead of Chelsea with one extra game in hand. Defeat in mid-week also ended United’s 5-match winning streak at Old Trafford and their 14-match unbeaten run also came to end in Premier League. After Liverpool’s game, Red Devils will faceFulham and Wolves in their last two Premier League fixtures of the season. Solskjaer's men are already in the Europa League final and they will also look to end the season 2020-21 with silverware.

Meanwhile, Liverpool can forget this season after a historic title win in 2019-20. After a good start to the season, the Reds lost the momentum after the loss to Southampton on New Year's day. Klopp’s side is now looking to boost their European qualification hopes. Champions League qualifications look slightly tougher for them. After the recent success over Southampton through Sadio Mane and Thiago Alcantara, the Reds moved to sixth and they have one extra game to surpass 5th placed West Ham. Chelsea also lost to Gunners in their previous game and it can help the Reds to look at the 4th spot. Liverpool have played two games less than Blues and if the Reds managed to get six points from the next two, they might be a contender to grab the Champions League spot for 2021-22.

Jurgen Klopp's men are coming off a 6-game unbeaten run in Premier League. Klopp would target European qualification. If Liverpool fails to achieve this, it would be the worst season for them in the last one decade. They have been knocked out in all domestic cups like FA Cup and League Cup. Real Madrid defeated them in the Champions League quarterfinal last month. Reds will face West Brom, Burnley, and Crystal Palace in their remaining fixtures. Liverpool lost just two of their last 14 on the road in Premier League but they failed to defeat Man United this season. Both sides last met in January this year when United overcame Reds in FA Cup, following a draw in Premier League.