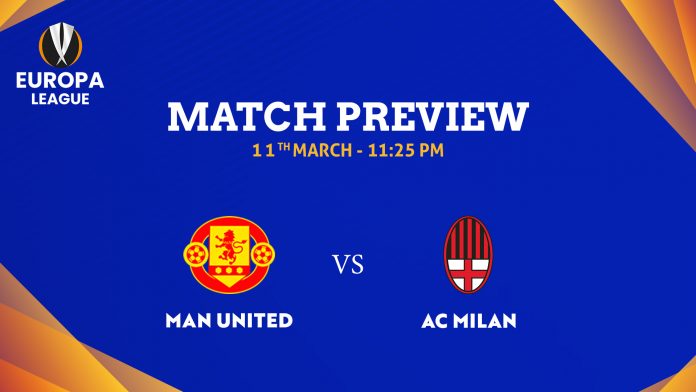 Two European challengers Man United and AC Milan lock horns in the round of 16 ties first-leg encounter of Europa League 2020-21.

Two European clubs who are sitting at the second spot in the search of a trophy in their domestic top-flights will lock horns at Old Trafford in Europa League. It’s going to be a cracker game of Football this competition. Man United stands second in Premier League and Milan stands second in Serie A summarizes the story for both clubs. They were once the title contender of the top-flight but table has turned against them. Man City and Inter Milan are looking to win the Premier League and Serie A title this year.

Man United are coming off a 2-0 victory over arch-rivals to end Man City’s 21-match winning run in all competitions. Ole Gunnar Solskjaer's side is 11 points behind of league-leaders. Man United entered in Europa League after the shocking group exit from the Champions League as they finished third in Group H with PSG and Leipzig. Man United are unbeaten from 17 games and are highly boosted after the victory in the Manchester derby. Red Devils have won four of their previous five games against Milan on home ground.

Meanwhile, Milan are going through a disappointing route. Their last good success in European Competition came in 2003 when they made into the final of the Champions League and defeated Juventus. Milan’s current form put them ahead in this first-leg game. The Italian club have won only two of their previous seven games across all competitions. Their arch-rivals Inter Milan knocked them out of the Coppa Italia and overtook them at the top of the table. Milan are six points behind to League-leaders and the title is slipping from their hands. The Rossoneri had victories in their last two away games against Roma and Verona. Milan are likely to miss their star player Zlatan Ibrahimovic and Ismael Bennacer again. Hakan Calhanoglu, Ante Rebic, and Theo Hernandez may be the other absentees for this away fixture. Chelsea loanee Fikayo Tomori may get the game tonight.

Man United will face some injury concerns. Marcus Rashford limped off with an ankle injury during a Premier League encounter with City. Edinson Cavani suffered an injury in training last week so he will not be available for this match. Paul Pogba, Juan Mata, and Phil Jones are likely to miss out from the Old Trafford clash. Dean Henderson will replace the first-choice goalkeeper David De Gea. He has kept clean-sheets against Real Sociedad, Crystal Palace, and City.