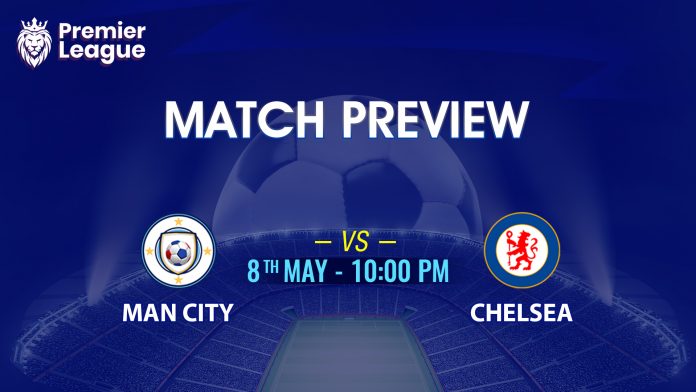 Man City and Chelsea will face each other in Premier League 2020-21 to prepare for the biggest Champions League final which will be played later this month. Man City will look to wrap up the formality of the Premier League title with three points, while Chelsea would look to strengthen their position in the top four.

After a dominating display in the Champions League semifinals, Man City and Chelsea will battle out in an important Premier League clash at the Etihad Stadium. Pep Guardiola's side is having a dream Football season. After winning the League Cup, they have booked their place in the maiden Champions League final with a 4-1 aggregate success over last year's runners-up PSG. On the other side, Tuchel’s Chelsea surprised 13-times UCL winner Real Madrid with a 3-1 aggregate success to find the ticket to Istanbul.

Man City requires only two points to claim their Premier League title. They have maintained their lead over Man United and Citizens would look to wrap up the formalities this Saturday. It would be a better finish for Man City as they will win the Premier League title at their home ground.

PSG’s attack couldn’t break the deadlock of City in the second leg game as well. Riyad Mahrez struck the early goal for the English club and Phil Foden scored in the 63rd minute to spoil the party for the French Club. City are coming off a 2-0n PL victory against Crystal Palace. They have 80 points from 34 games and they have a lead of 13 points over United with one extra game. They are unbeaten from the last five matches across all competitions and kept the clean sheet in the last two games against Palace and PSG. The home game might give them a headache as Man United and Leeds United have defeated Table-Toppers at the Etihad. They cannot even forget how Chelsea defeated them in the FA Cup semifinals.

Meanwhile, Tuchel did wonder to Blues since Lampard’s departure. They defeated the tournament’s most successful side Real Madrid. After securing a 1-1 draw at the Estadio Alfredo Di Stefano, Chelsea made a fluent start to the second leg game with 28th-minute strike from Timo Werner. Just before the final whistle, Mason Mount netted the second goal of the game to seal the berth in the final. The former PSG manager is going to play his second UCL final in a row. Last time, his side lost to Bayern.

Chelsea is in a strong position to finish in the top four but they cannot afford any drama in the final month. They are three points ahead of 5th placed West Ham and if they lose here, West Ham will get the chance to make this race interesting. They are coming off a 2-0 PL victory against Fulham and they are just two points behind 3rd placed Leicester. Tuchel is now unbeaten from 11 away matches across all competitions. Blues managed to keep the clean sheet in 11 matches out of 15 under Tuchel. Chelsea would look to replicate the similar performance of FA Cup semifinals.