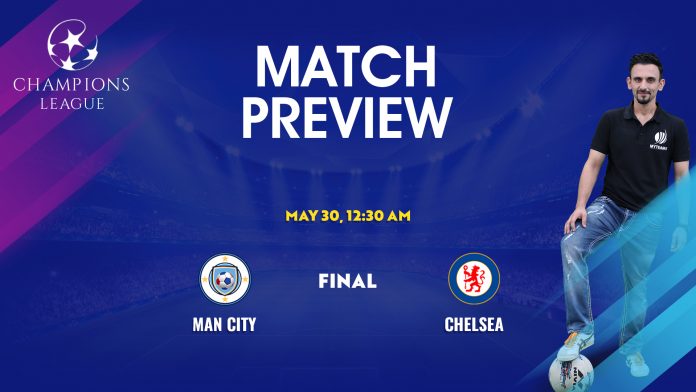 Man City and Chelsea will make travel to Porto for the Champions League final. Man City has recently won the Premier League title and also won the League Cup, while Chelsea made it into the top four in PL.

Club football 2020-21 is going to end with the biggest Champions League final between two Premier League powerhouses. Man City are coming off a tremendous Premier League success and they are eyeing to grab the third trophy of the season. Pep Guardiola's side overcame the in-form PSG in the semifinal to book their maiden Champions League final ticket. City gave a perfect farewell to Auguro in the final PL game against Everton. 16500 spectators will watch a battle between English giants for the European glory. It’s a best season for City and they would love to end this season with the first-ever Champions League trophy.

Riyad Mahrez’s free-kick gave City a 2-1 victory in the first leg game and later, City clinched the semifinal game with a 4-1 aggregate success. They have won 11 out of 12 games in this competition so far and won each of their last seven games. They defeated Everton 5-0 in the last PL tie, courtesy of strikes from Kevin De Bruyne, Phil Foden, Gabriel Jesus, and Sergio Aguero. Guardiola had won two Champions League titles with Barcelona in 2009 and 2011. He may join the elite club of Bob Paisley, Carlo Ancelotti, and Zinedine Zidane with three UCL trophies.

Meanwhile, Chelsea had a roller coaster ride in season 2020-21. After Lampard’s departure, Tuchel has given this club a huge transformation. The last day of the Premier League was pretty tough but Leicester’s defeat to Spurs assured their Champions League 2021-22 qualification. The Blues had a dull campaign in the month of May. Tuchel’s unbeaten run also came to end this month. Blues suffered a derby defeat to Gunners and faced 2-1 defeat to Aston Villa in the last top-flight game. They can be proud of their performance as they have beaten Man City in Premier League last time out. They edged past Spanish Giants Real Madrid in the semifinal. Karim Benzema managed to provide an equaliser to end the first leg 1-1 draw and Chelsea made a fire at Stamford Bridge to bag a 2-0 success over Zidane’s side, thanks to Timo Werner and Mason Mount.

Chelsea came close to add one silverware when they faced Leicester in the FA Cup final but they lost it again. Chelsea can replicate their 2012 UCL glory and they have the experience of winning this prestigious trophy. This is Thomas Tuchel’s consecutive Champions League final. Last year, he lost the final with PSG against Bayern. Chelsea saw three defeats from their last four games. They somehow managed to crack the top four finish but a poor run before the final may hurt their preparation. They have lost just one game in the Champions League campaign and conceded only four goals which is a great thing for them ahead of the finale.