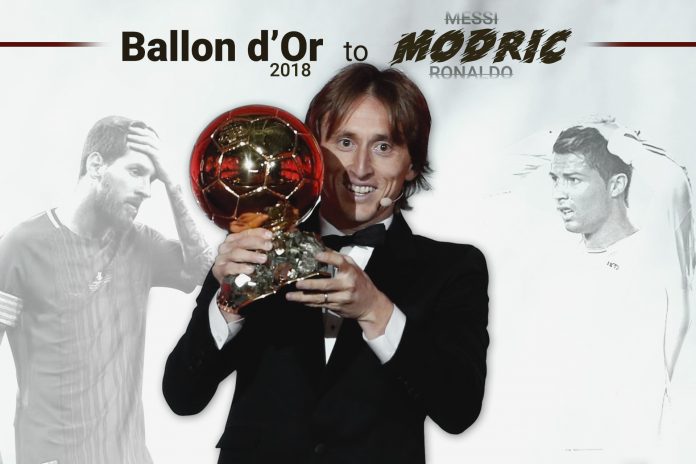 Luka Modric, the 33-year-old Croatian player, who led its team to the final game of the FIFA world cup 2018, created history on Monday. The player was seen walking at the Red Carpet of an alluring ceremony held in Paris, only to be crowned as the 2018 Ballon d'Or winner. The player becomes the first from Croatia team to be honored by the title.

Mordic not only became the first Croatian to bag the title but also ended the 10-year-old controversial battle of “Who is better” between two most prominent players of the football world, Cristiano Ronaldo and Lionel Messi.

Both Messi and Ronaldo hold 5 Ballon d'Or titles each, the 2018 title was supposed to be a tiebreaker between the players. However, things took a different turn when the nomination list was announced at the ceremony. In the list, Messi who was either the winner, a runner-up to Cristiano Ronaldo or one of the top-three aspirants, was on number 5 in the list, this year.

Modric who won the title was followed by Cristiano Ronaldo who was on the 2nd spot in the list. The other players in the list were France forward Antoine Griezmann on the third spot, France player Kylian Mbappe on fourth. The Brazilian star Neymar, who managed to get away with the third spot last year, slipped to the 12th rank.

The moment was very emotional for Modric and his family, leaving everyone teary-eyed. Modric’s father was even shown on the big screen at the event, wiping away his tears, when the 33-year-old player was honored with the award.

The player was quoted as saying, "As a kid we all have dreams. My dream was to play for a big club and win important trophies. The Ballon d'Or was more than just a dream for me, and it is really an honor and a privilege to hold this trophy."

The football world is witnessing great changes that can play a turning point in the history of world football. Also, can we define it to be an end to the Ronaldo-Messi era and a chance for new players to make their place? The time will tell the rest, stay tuned to receive the latest sports update.