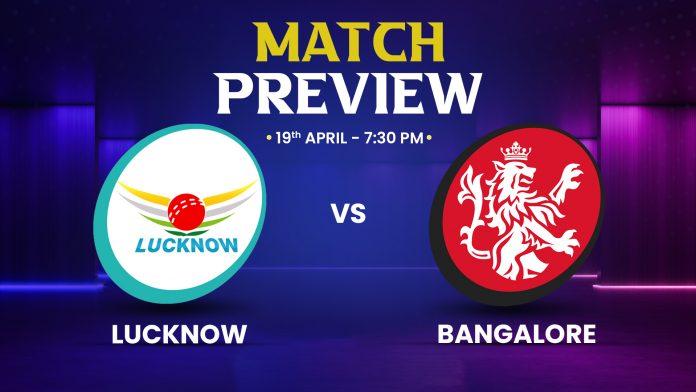 Lucknow vs Bangalore will face off in the Indian T20 League 2022’s 31st encounter. Both the teams have put up jaw-dropping performances so far in the tournament, and the fans expect to see some more fireworks from them. Lucknow is at number spot at the season’s points table, while Kolkata is currently in third place.

In its debut season, Lucknow is at number two spot with four wins. KL Rahul’s team surprised the fans this season when they defeated the mighty Mumbai. The skipper scored a magnificent century (103 runs) off just 60 balls. The rest of the batting unit has been performing well since the start of the season.

The young guns in the bowling unit have impressed as well, especially Avesh Khan. The former Delhi player has picked 11 wickets so far in the tournament.

Bangalore is capable of beating some of the best T20 teams in the world. However, their shaky middle order is a matter of concern for the fans. Skipper Faf du Plessis has managed to put on some runs on the board with the bat, but there has been no help in the middle order. However, Dinesh Karthik has emerged like a Titan and played mesmerising innings in the last few matches.

Last year’s Purple Cap holder Harshal Patel is nowhere near his previous form. The bowling unit is leaking runs and the batting side has paid the price. Surely, they have to come up with better strategies for the next game.

The team batting first has won both of the last few games at the site, thus runs on board might be beneficial if the bowling strategy is executed successfully. The captain who wins the toss, on the other hand, is likely to bowl first, based on the tournament’s tendency.

Ayush Badoni is a right-handed batter from Lucknow. The 22-year-old has been a highlight so far in the tournament. In his Indian T20 League’s debut, Badoni hit a magnificent half-century.

Deepak Hooda is a right-handed all-rounder for Lucknow. He has really impressed the fans this season with his sensible innings in the middle overs. Hooda’s ability to hit mighty sixes and quick running between the wickets has been a great addition.

Glenn Maxwell is right-handed all-rounder for Bangalore. Batting in the middle order, the Australian cricketer has scored crucial runs for his franchise in the last few seasons.

Virat Kohli is a right-handed batter from Bangalore. The former captain of Bangalore is the all-time highest run-scorer of Indian T20 League. Recently, his performance with the bat has been mediocre. However, one cannot count Kohli out of a match and that is why he should be your top pick for the next match.

Dinesh Karthik is a right-hand batter and wicket keeper for Bangalore. The former Kolkata captain has been a valuable addition for the Bangalore franchise this year. In the last few years, Karthik delivered back-to-back jaw-dropping performances. Surely, his ability to hit the white bowl out of the park will come in handy for Bangalore’s next match.

Avesh Khan is young right-hand medium-fast pacer for Lucknow. The young bowler has been on a roll in this year’s Indian T20 League. He has bagged 11 wickets for his team, and is showing no signs of stopping.

Suggested Playing XI No.1 for Lucknow vs Bangalore MyTeam11 Team:

Suggested Playing XI No.2 for Lucknow vs Bangalore MyTeam11 Team: