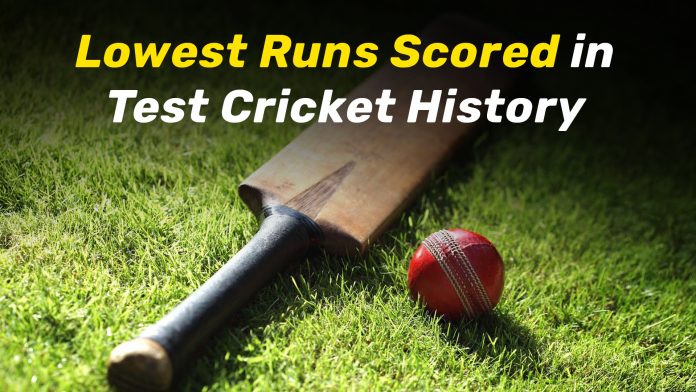 The second test between the Men in Blue and Caribbean Giants is all set to begin from 30th August 2019. The game will be held at Sabina Park, Kingston, Jamaica beginning at 8:00 P.M. IST. With the first test in their pocket, team India is everyone’s favorite to win the other test too, but amid all this batting, bowling and scoring action, we’ve come up with something that will trigger the curiosity factor in you.

The longer-format of cricket is known for the possibilities of high-scoring games, but what if we tell you that a Test inning ended up with just 26 runs. No-No, the game wasn’t abandoned & each of the ten players from the team got the chance to play. Shocking, right? Well, we have a lot more for you then. Here are the lowest scores ever recorded in the history of test cricket. Read on.

Bangladesh being a newbie in the world of Test cricket, in comparison to the mighty West Indies, does not have quite good statistics in the game. But, the 2018 match of the team against West Indies, held at North Sound witnessed the lowest of the team. A rapid fall of wickets with four players moving back to the pavilion for a duck and intense bowling from the Caribbean Giants restricted Bangladesh’s first innings to just 43 runs.

The best test team as per the ICC Men’s Test Team Rankings has also found its place in the list of lowest scores. It was the summer of 1974 when India was touring England. The Men in Blue showcased a terrific performance in the first innings, putting up 302 runs on the board. But the second inning of the game brought with it an embarrassing defeat. Team India managed to pull off just 42 runs in the second innings, with wickets falling every couple of overs. The innings was wrapped up in just 17 overs, & England went on to win the 2nd test by an innings and 285 runs, additionally winning the series.

Another such incident dates back to the year 1902 when Australia and England met each other at Birmingham for the 1st test of Australia’s Tour of England. The hosts started the game with an exceptional inning of 351 runs whereas the visitors failed to keep up the momentum of the game. The team failed to stay intact against the England bowling and went all wickets down for a score of 36 runs. However, the match was, later on, declared drawn, but still, Australia’s low scores managed to grab the attention of many.

The next on the list are the super-powerful Proteas. Scrapping a place in the top 3 of ICC Men’s Test Rankings, South Africa too doesn’t look to have a very good past record. Apart from suffering a whitewash during their 1932’s tour of Australia, the South African team suffered another loss in the 5th test of the series. Australia already four games in their hand, & the 5th test could have yielded no good for the visitors. But the defeat came as an embarrassing one when South Africa managed to pull off only 36 runs in the first innings. Things got more awkward & displeasing for the team in the second innings when they lost all of their wickets for a total of 45 runs.

And the last on the list is the lowest recorded score in the history of test cricket. New Zealand, the current leaders of the Test rankings after India hold the record for scoring the least runs in the longer-format of the game. This time, England was touring New Zealand, and it was the second test of the series. New Zealand opted to bat first after winning the toss & played a decent first inning, knocking 200 runs. But the second inning brought in shame for the team as they wrapped up their game with just 26 runs. The score & the defeat became more unbearable as it came in the homeland of the hosts, unlike others in the list.

Well, this was our list of lowest scores ever recorded in the history of Test cricket. The play & conditions of the team have definitely improved since the list, but the scores will long-lived. In case you feel we missed out any, do let us know in the comments below. We’ll soon be back with another interesting story to serve your curiosity carving, but till then, stay tuned to MyTeam11 for all the latest sports stuff, match predictions and match reports.