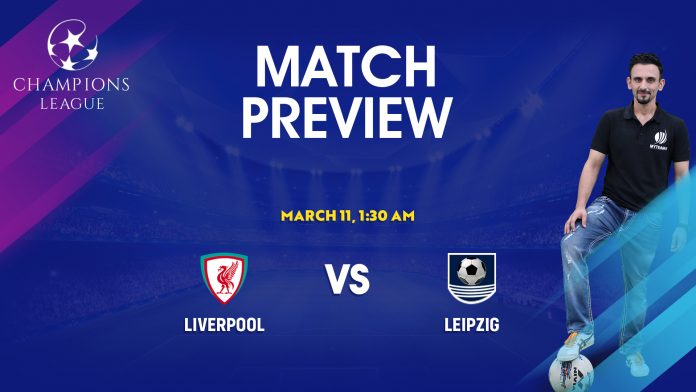 Liverpool and Leipzig will be back to Budapest for the second leg round-of-16 fixture of Champions League 2020-21 tonight.

Liverpool will enter in the second leg game of Champions League round-of-16 and they will be confident to crack the quarterfinals. The reigning PL winners are in favourite position after 2-0 success in the first leg game. They have the advantage after scoring two away goals. Reds have never been knocked out of this competition after winning away from home in the first leg. Liverpool’s numbers in home matches are outstanding. The Reds have also never lost any of their previous 20 'home' matches against German opposition. They have won 16 matches and drawn four with an aggregate score of 52-9.

The current form pushed their goals back as they lost their previous six games at Anfield which is the worst run in their club history. It's a home game in the Champions League but they are not playing at Anfield due to COVID. They haven’t scored a goal from open play at home in 2021 and they scored just one home goal in the last seven fixtures which came through a penalty spot.

Liverpool are unbeaten in their previous 11 meetings with German clubs and they have won 15 of their last 17 two-legged clashes against a Bundesliga side. The German club faced an English opponent twice in the Champions League and out of four ties, they emerged victorious three times.

Meanwhile, Leipzig has to produce a quality game to overturn this deficit and they can back themselves considering the current form of Liverpool in the Premier League. Leipzig cracked the knock-out stage with pure perfection. The German outfit defeated United in the last tie to stand second to PSG in their respective group. They also conceded 12 goals during this run which a bad record for any team this season.

Nagelsmann’s side has been consistent in past weeks, losing just three in 18 games across all competitions and they also kept twelve clean sheets during this run. The German outfit have won each of their last four games with three clean sheets. In the previous outing at Bundesliga, they edged past Freiburg 3-0 on Saturday. Leipzig are just two points adrift of Bayern Munich in Bundesliga 2020-21 and they are the main contender to end Bayern’s long title streak. The last edition’s semifinalist requires something good to crack the quarterfinals. Leipzig have to defeat Liverpool with a margin of three goals and they can only do if they build pressure on the Reds’ defense from the early first half.