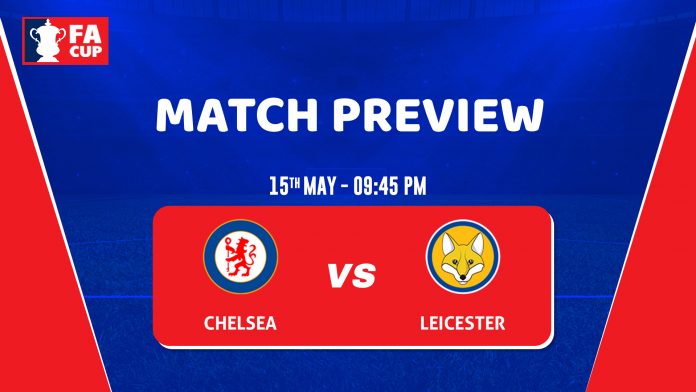 Leicester City and Chelsea will fight out in the FA Cup final at Wembley Stadium tonight. Foxes would eye their maiden trophy, while Blues will look for record ninth title.

After deciding the winners in League Cup and Premier League, English Football will end their final domestic cup tonight at prestigious Wembley stadium in front of the 21000 spectators. Two in-form sides Leicester and Chelsea will lock horns for the title. Leicester will play their fifth FA Cup final, while Blues are taking part in its 15th final in this competition. Leicester defeated Southampton in the semifinal and Chelsea overcame Man City to appear in the final.

Brendan Rodgers's men are in tremendous form and they recently beat second-string Man United XI to boost their top-four position, thanks to goals from Luke Thomas and Caglar Soyuncu. They are just four points behind 2nd place Man United and two points ahead of Chelsea. Foxes can now aim for one silverware this season and they can break their losing streaks in the FA Cup final. It will be their first appearance in the final since 1969. They have won the Premier League titles during this phase but they would keen to add this title to their trophy cabinet. Rodgers looks optimistic this time to complete the trophy cabinet of the Foxes. They will be playing the final in Wembley after a long time since their EFL Cup triumph in 2000. Foxes have lost 10 of their previous 15 matches at Wembley and won four. They have added four wins out of their last six games across all competitions.

Meanwhile, the task for Foxes would not be as simple as they are thinking because Chelsea is going through a dream phase under Thomas Tuchel. The Blues have been transformed since the departure of Lampard. Chelsea will play back-to-back FA Cup final as the last time they lost to Arsenal in the final. Coincidentally, they recently lost to Gunners in the Premier League outing which can hurt their top four goals as Liverpool earned vital three points at Old Trafford with a 4-2 victory over United. They are 4 points ahead of the Reds with one extra game. Blues have the glorious chance to add silverware before the Champions League final. They haven’t conceded a goal under Tuchel in FA Cup and before losing to Arsenal, they had a 7-game unbeaten run which also includes UCL SF victory over Real Madrid and PL victory over Champions Man City.