“Leading Pakistan in front of home crowd a highlight of my career,” says Sarfaraz Ahmed 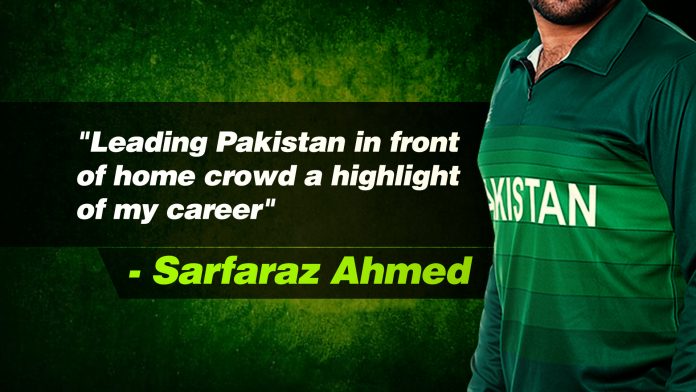 The Pakistan team is all set to host its first ODI bilateral series since Zimbabwe visited the nation in May 2015. Interestingly, all three ODI games will be held in Karachi, with the city hosting the first time since the 2009 incident. On this occasion, Pakistan skipper Sarfaraz Ahmed and his teammates urged the local fans to come out in large numbers and support the game of cricket in the forthcoming series against Sri Lanka.

"Leading the Pakistan cricket team in a bilateral ODI series in front of my home crowd will be one of the highlights of my career," said Sarfaraz. "I can't wait for Friday, which will mark the memorable occasion, and I hope when I walk out, I have a full-house behind me, not only cheering me but both the sides. Fans are the lifeline for any sport as they are the driving force for any team or player. They give extra energy to the teams and help them produce their very best.

"History will be made on Friday when Karachi will host the first bilateral ODI series since January 2009. I request all local cricket fans to be part of history so that they can tell the next generation that they were at the National Stadium when an international series was played," he added.

"I can't thank enough for the love and respect I have received from all my fans in the early days of my career. Friday will be one of my biggest days when I will take the field as Pakistan vice-captain. I will want the entire country as well as the National Stadium crowd to make this a day to remember for me.

"As a youngster, I have seen on television packed-to-capacity National Stadium for ODIs and the two matches that immediately come to my mind are the 2004 and 2008 ODIs against India. In 2004, Pakistan lost by five runs despite Inzamam-ul-Haq's brilliant century but four years later, Younis Khan's belligerent 123 not out steered us to eight wickets victory. I am hoping there will be a similar crowd number when we will play Sri Lanka," Babar noted.

An emotional Mishah-ul-Haq, the head coach of Pakistan, recalled the last time ODIs were staged in Karachi, with the former captain being part of that side. "Friday's match will be an emotional one for me as I played at the National Stadium when it last staged an ODI, also against Sri Lanka. Ten years later, I will start my time as head coach of the Pakistan national cricket team, so the time has moved really fast.

"But one thing that stands firm is the history of Karachi crowds, which have always turned up in big numbers to support cricket. They have weathered all conditions and contributed in the success of international matches hosted at the National Stadium.

"As the national cricket team commences its 2019-20 international season in Karachi, I hope the crowds will once again be there to encourage us and help us do better. No player or team can succeed without the support of its fans, and we look forward to them being behind us when we start a new era in Pakistan cricket."