Largest Cricket Stadium in the World 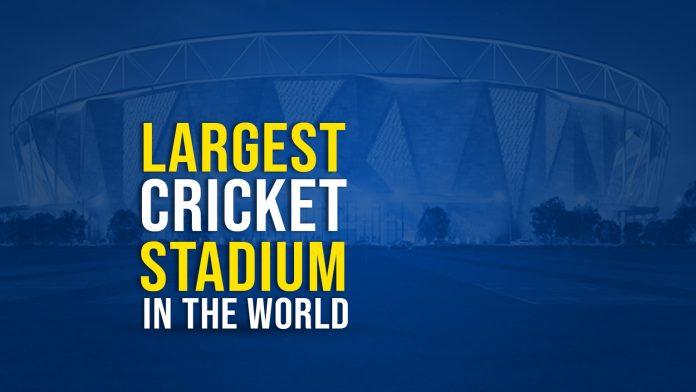 In India, cricket is not just a game, it’s a religion. In the past, people have come out with one of the most innovative ways to acknowledge the players of this beautiful game. Since the inception of cricket, there have been numerous stadiums that are considered pilgrimages for players. So, today we’ll have a look at which is the largest cricket stadium in the world.

The Narendra Modi Stadium in Motera, Gujarat is currently the largest cricket stadium in the world. The stadium has an enormous capacity for seating 1,32,000 spectators to witness some of the best matches of the game. The stadium is owned by the Gujarat Cricket Association and comes under the aegis of the West Zone.

The cricket ground was built on the banks of the Sabarmati river on the outskirts of Ahmedabad in 1982 and it was formerly known as Sardar Patel Stadium, honouring the former Home Minister of India.

In the late 2000s, the stadium became a regular venue for international matches. However, in 2015, the association completely demolished the stadium and rebuilt it by 2020. Upon its renovation, the stadium was renamed The Narendra Modi Stadium by the Gujarat Cricket Association in 2021.

In the top 10 largest stadiums, India has 6 stadiums in the list. These stadiums have hosted many international matches and provide splendid experiences for the crowd in attendance.

When the stadium was constructed in 1982, it was known as Gujarat Stadium. To construct this stadium, the Government of Gujarat donated 100-acre land on the banks of the Sabarmati river and the stadium was completed in just nine months.

In 1984-85, the stadium hosted its first ODI between Australia and India, which the Kangaroos won comprehensively. In 1987, legendary cricketer S. Gavaskar became the first player to complete 10,000 runs in Test cricket against Pakistan in the stadium and became the highest run-scorer in Test cricket

Furthermore, former Indian captain K.Dev has two big memories of performing at this venue. He took nine wickets against West Indies in an innings in 1983, additionally, he took his 432nd Test wicket to become the highest wicket-taker in 1995. Moreover, the stadium has hosted ODIs for all the World Cups held in India.

In 1999, S. Tendulkar scored his first double-century in Test Cricket. He also reached a landmark of 30,000 runs in International cricket in a match against Sri Lanka in 2009. Furthermore, in 2011, he also became the first-ever cricketer to score 18,000 runs in one-day cricket.

The stadium continues to be one of the go-to stadiums for all the major matches happening in India. With the renovation in 2020, the Narendra Modi Stadium has become the number 1 stadium across the globe.

These are the list of the top 10 largest cricket stadiums in the world. If you want to keep learning about such topics, tune into MyTeam11! Furthermore, you can use the MyTeam11 application and create teams in the upcoming World T20 Cup and Win Big!! Keep playing, keep winning!