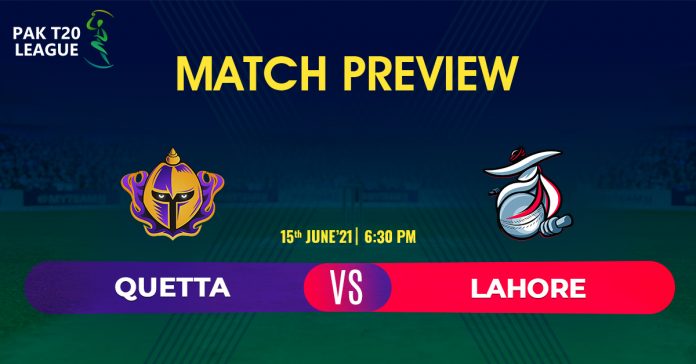 Struggling Quetta will face last season’s runner-ups and in-form Lahore in a must-win encounter. They have almost become the first team to get eliminated.

Quetta and Lahore will meet in the first doubleheader game in Pak T20 League 2021. Both sides have a reverse story in 2021. Lahore have lost only two games out of six and Quetta lost 6 out of seven. It’s an end story for Sarfaraz’s troops and playoffs qualification is like trekking to the mountain. They have just two points with three more games to go and they can reach a maximum of 8 points. Multan’s victory in the last game is also a wake-up alarm for Quetta. If they lose, it’s an end to their campaign in Pak T20 League 2021.

After losing the first two wickets in the powerplay, Peshawar smashed Quetta’s bowlers out of the park. They posted 197 on board and Quetta looked dull in the chase. One more time, they even failed to play their natural game. They got a good start from Usman Khan and Saim Ayub with a 62-run stand. After losing the first wicket, they formed a collapse and didn’t recover then. Their margin of defeat is a big concern to get the playoffs ticket. They have to win all remaining matches with a huge margin. Faf du Plessis got injured in the last game and he might be rested today. Russell’s availability is in doubt due to an injury in the previous game.

Meanwhile, Lahore made a fluent start to Abu Dhabi leg with two consecutive wins but defeat in the last game was shocking for them because they were ahead in many phases. They got 5 wickets of Islamabad on 20 but allowed Iftikhar and Asif Ali to revive the side. They were in a good position at one stage when they were chasing 153 but they lost their last 8 wickets on 38. Lahore can make improvements in their game. Faulkner came out as a surprising package for them who picked 8 wickets in just 3 matches at an average of 9.25. Rashid Khan’s role is also important. Bowling is their big strength and Lahore would also expect a big knock from Hafeez who looked dull in the second half.

Abu Dhabi’s track is a decent track for T20 and we may expect a quality game between bat and ball. Chasing is a tough call on this surface and a score of 150-160 would be a tricky total to chase in 2nd innings.

Dangerous with the new ball, 8 wickets in just 3 matches

A top T20 batter and might be crucial in top-order