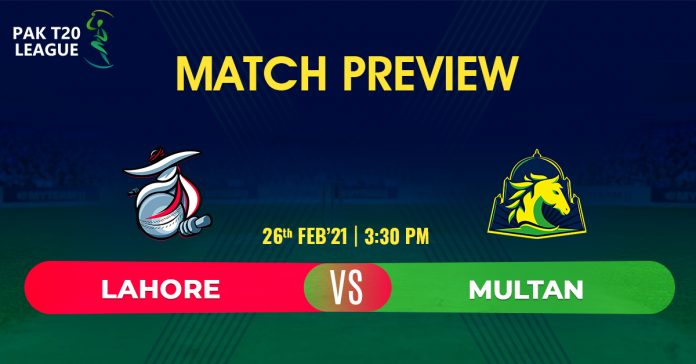 Struggling Multan will continue their campaign in Pak T20 League 2021 when they face in-form Lahore in the afternoon-clash.

Pak T20 League 2021 is back after the midweek break and in the first doubleheader clash, Lahore and Multan will lock horns in National Stadium, Karachi. Multan appointed Mohammad Rizwan as the new skipper for the 2021 season but it didn’t offer happiness to this side and Multan lost its first two matches. The trend of chasing sides winning the matches continues in the tournament and the same happened with Multan. They lost the toss in both games and opponents chased down their totals. In both games, their bowlers showed tough fight. Islamabad chased down their total despite losing six wickets on 74.

In the previous match, they posted a huge 193 on board, courtesy of 84 from James Vince and 28-balls 41 from Rizwan. 193 wasn't enough for Multan as Peshawar chased down the total with one over spare. At one stage, Peshawar required 60 off 29 balls but weak death-bowling hurt Multan. Toss is not in the captain’s hand but Rizwan has to figure out the other issues. In both games, bowlers allowed chasing sides to dominate them. Batting has been improved. Maqsood and Vince performed in the last match. Chris Lynn didn’t get a good start in both games and Multan would expect him to fire at the top.

Meanwhile, Lahore is highly boosted after two back-to-back comfortable victories. In the opening match, they restricted Peshawar on 140 and chased it down with 9 balls spare. The second game was more dominating. Quetta posted an imposing total of 178 and Lahore made the mockery of this run-chase. Fakhar Zaman and Mohammad Hafeez chased this total in 18.2 overs, losing just one wicket. Fakhar’s form is a big boost and Hafeez is just improving his number with each game.

It might be the last game for Rashid Khan, considering Afghanistan's Test series with Zimbabwe in UAE. Lahore has a balanced unit. Haris Rauf played his first game and picked 3-wickets. The combination of Shaheen and Rauf is creating big depth in their bowling. Hafeez also bowled two overs and they have the options to complete the quota of 5th bowler. Sohail Akhtar would aim for a hattrick of victories on Friday.

Karachi’s surface is made for batting and we have seen the outcomes in the last two outings where 190 plus scores were also not safe. Chasing sides have won all six matches so far. Toss will be important and it might be a high-scoring affair.