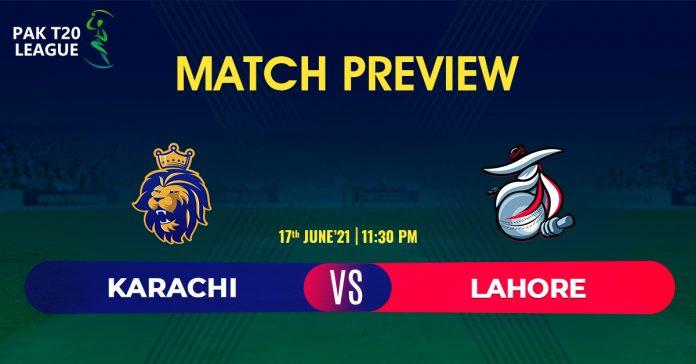 Struggling Karachi will face Lahore in a must-win encounter of Pak T20 League 2021. Both sides are coming off a loss in their previous encounters.

The second doubleheader game of today will be played between last season’s finalists Lahore and Karachi. The top sides of last season have been inconsistent this season. They were in good touch when the tournament was going on in Pakistan but they missed out the momentum in Abu Dhabi. Karachi’s story is more disappointing than Lahore. They suffered three consecutive defeats now and one more defeat will make things more together.

In the previous game, the batting lineup let them down. Babar got out on duck and Karachi failed to recover from the powerplay blows. They were restricted on 108 which is the lowest total of this season without getting all-out. Karachi’s batting relies on their star batsman Babar Azam who had an off day in office and Peshawar took advantage of it. Sharjeel was in fine touch in the first half but his form in UAE is so poor.

Imad Wasim has to look for improvements if they want to find themselves in the playoffs. Karachi now have eight points from eight matches with 5 losses. With two games in hand, they can reach a maximum of 10 points, and still, they have to rely on the other team’s performance. If they lose, they might be eliminated because Lahore will reach 10 points and Multan may knock Karachi out of the season.

Meanwhile, Lahore has a reverse story as they have five wins and three defeats out of eight matches. They made a great start to the Abu Dhabi leg but failed to take it further. They recently lost to the tournament’s weakest team, Quetta in a dramatic manner. They failed to chase down 159 despite having a positive start. Fakhar Zaman didn’t deliver much in Abu Dhabi after an impressive batting in Karachi leg. Faulkner has been a surprise package who picked 11 wickets from just 4 matches at an average of 9. Rashid’s role is really important but batting is Lahore’s main concern. This is the time where Lahore needs to look at their combination. With two more games to play, Lahore needs only two points to secure its position in the top four. They can later aim for a top-two finish. Karachi has won three out of the last five meetings between two sides, while Lahore won the most recent clash in February this year.

Abu Dhabi’s surface is good for batting and it requires the sensible approach on the track. Spinners would control the runs and pacers can draw attention with the new ball.

8 wickets so far with an impressive economy, he is also handy with the bat

Showed great performance in the previous game, handy in middle-order