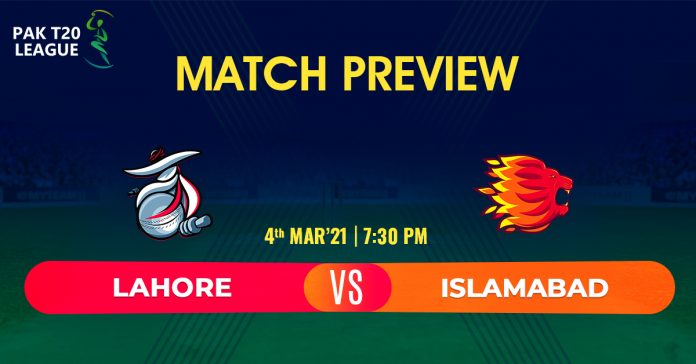 Lahore and Islamabad face each other in Pak T20 League tonight to take the top spot in the points table. Both sides have won three matches out of four.

Two confident and in-from sides of the season, Lahore and Islamabad, will lock horns in Pak T20 League. The winner will take the top spot. Both sides now have 6 points, and Islamabad are ahead of Lahore on net-run-rate.

Lahore won their first two matches and lost to Multan. They added their third victory of the season against Karachi on Sunday. Last season's finalists chased down 187 in the last game. Shaheen Afridi provided early wickets and finished with three for 27. Early blows couldn’t trouble Karachi, and they posted 186. In the last 4 overs, Karachi managed just 24 runs, which created a big difference in this match. Lahore lost Sohail Akhtar and Denly on the first five balls, but Fakhar Zaman took the responsibility to charge Lahore in the chase. David Wiese and Ben Dunk rescued them when they required 35 off the last 16 balls.

Lahore has been lucky when it comes to the toss, but they have played better cricket. Fakhar Zaman has played two quality knocks in the chase, and he has amassed 189 runs so far at an average of 63. Hafeez is their main strength, and he played a sheet-anchor in middle-order. Ben Dunk got runs in the last game, and David Wiese showed his impact at lower-order. Afridi and Rauf are the pillars of pace-attack along with Daniyal. Lahore is the most balanced unit, and they are clear favourites despite the toss factor.

Meanwhile, Islamabad also has the same story, and they also have chased in three matches out of four. They found success when they won the toss. In the last outing, they defeated Quetta by 6 wickets to reach the second spot in the points table. The capital outfit bagged four wickets of Quetta in the powerplay. They kept the run-rate down and restricted Quetta on 156. Lahore made the mockery of this chase and crossed the line with 18 balls spare. Paul Stirling scored a fine half-century and provided a good start with Hales. Rohail Nazir also looked better with gritty 34. Islamabad have a compact side, and they might be dangerous if the toss goes in their favour.

Karachi’s surface is a batting wicket. Pacers can take help from the pitch with the new ball, but later the match progresses, it becomes a pure batting surface. The dew factor may play an important role in 2nd innings.