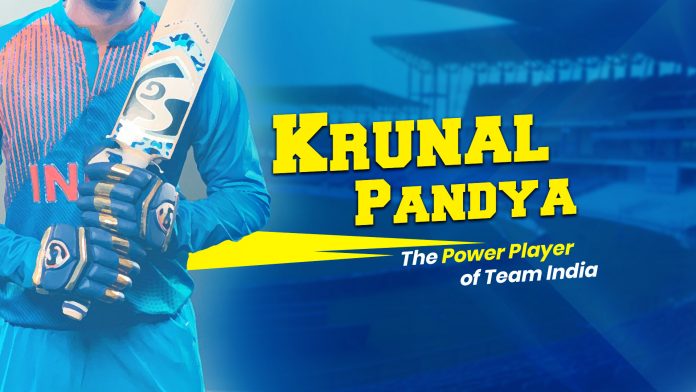 When one brother was ruling the international circuit, the other of the Pandya brothers was prepping to get his name to inscribed in the golden book cricket records. From domestic cricket in 2016 to becoming the most sought name in 2018 to becoming a pillar of strength for the all-round performance of team India in 2019, Krunal Pandya has come a long way.

'Man of the Match' to 'Man of the series,' the player has been focusing on achieving all sort of feats with his brilliant performance. He knows how to get a hold of the opponent with his spins and hard-hitting batting style. In short, he’s a complete action-pack that the Men in Blue need for their future endeavors. With this special post dedicated to the efforts, achievements, and journey of the player, we’re here to tell you why the elder one of the Pandya brothers is the power player of team India.

Krunal made his first-class debut in the year 2016 playing domestic cricket for Baroda, wherein he achieved the title of leading run-scorer and wicket-taker of his team, within just six months. The player scored 366 runs in just eight matches at an average of 45.75 and strike rate of 81.33, alongside scalping 11 wickets during the 2016-17 Vijay Hazare series. After this, there was no looking back for the players. He soon found himself making debut in the most popular cricket league, IPL, with one of the strongest teams of the tournament.

IPL making him a T20 Pro

After a fascinating domestic career, the elder Pandya was given a chance in the IPL 2016 where he was bought by Mumbai Indians for a sum of ₹2 crore. The debut match was quite average where he picked the wicket of Dinesh Karthik, ending the game with stats of 1/20 in 4 overs and 20 runs off 11 balls.

Well, the following season witnessed a terrific transition, when the player bagged 2 Man of the Match titles and helped Mumbai Indians clinch the trophy in the year 2017, defeating Rising Pune Supergiants. The continuous progress and betterment in the performance led to Krunal being auctioned for a whopping sum of ₹8.8crore in the IPL 2018 auctions. With each day the player is mastering the art of playing shorter format of the game which is clearly visible in his performances.

Balancing out the Team

Though he made his international debut way after his younger sibling, the player has managed to create a name for himself in the team and the game. He has managed to get that place where his inclusion or absence can significantly affect the team’s winning.

From taking up Harbhajan Singh’s place in his absence during the IPLs to filling the void for Kuldeep Yadav’s absence, he has justified all his responsibilities and potential.

The other important factor that justifies Krunal Pandya’s selection as the power play of team India is his performance against Australia. The player was named in the Indian squad for their tour against Australia where he played all three T20I matches and managed to bag the title of Player of the Match in the last match for his scintillating performance of 4/36 in 4 overs.

Another achievement came during the recent tour of Blue Army to West Indies where Krunal managed to get away with the title of the Player of the Match in the 2nd game and Player of the Series in the end.

Experiencing his own share of highs-and-lows, Krunal has managed to get himself the recognition he desired in international cricket. Establishing himself in every format of the game he has played, domestic, international or leagues, the player is on a no-stop spree. With his enthralling performance over the years, he is sure to make it to next year’s T20 World Cup. What do you think about his selection, do let us know in the comments section below?