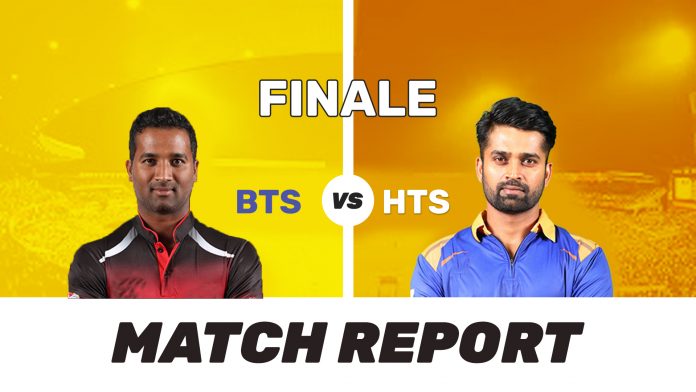 Contributing with both the bat and ball, Aditya Somanna, shines out as the prominent star during the final game of KPL 2019. Knocking-off a score of 47 runs alongside picking up three wickets including the crucial wicket of Devdutt Padikkal, Somanna helped Hubli Tigers clinch an eight runs victory against Bellary Tuskers. The victory made Hubli Tigers winners of KPL 2019.

The final that was held on August 21, 2019, at the SDNR stadium in Mysuru saw, Hubli Tigers winning the toss and deciding to bat first. Their opponents, Bellary Tuskers, looked all set to clinch their second title, but destiny had something else in store for the team.

The batsmen from Hubli Tigers held their nerves tight & scored some good runs to keep the team in the league. Posing a target of 152 runs on the board, Hubli Tigers finally went to rest. Bellary Tuskers, with two X-factors, Prasidh Krishna, and K Gowtham, in their team looked at the target as a piece of cake.

However, soon the game turned out to be quite harsh for Bellary Tuskers, who were suffering as three wickets down at a score of 25. The target that looked a piece of cake once was now becoming hard-to-achieve. It was only when Devdutt came to the crease, that the Tuskers took a sigh of relief. Scoring 68 runs off 48 balls, he provided stability to the team before being made to walk back by Somanna.