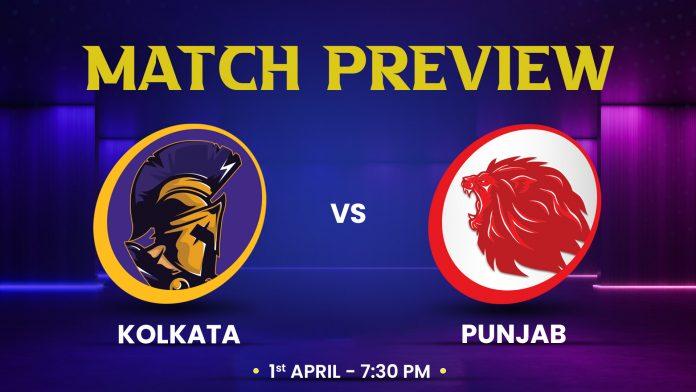 At Mumbai’s Wankhede Stadium, Kolkata will face Punjab in the eighth encounter of the current Indian T20 League 2022. With one victory and one defeat thus far in the fifteenth season of the cash-rich competition, Kolkata are ranked fifth in the points standings. Punjab, on the other side, has only played one game, defeating Bangalore. Kolkata Knight Riders have won 19 of the 29 meetings between these two teams, while Punjab Kings have won 10.

Kolkata’s greatest strength is, of course, their captain and his current form. To begin with, unlike former leaders Dinesh Karthik and Eoin Morgan, Shreyas Iyer is regarded as a long-term possibility as the team’s leader. Venkatesh Iyer is another excellent aspect of this group. Following a successful season last year, the all-rounder has progressed to the international level, where he has made a positive impact.

The Test reject Ajinkya Rahane hit 44 in his comeback as an opener against Chennai, which came as a huge comfort for the franchise, which would be without Australian opener Aaron Finch for the first five games. Pacer Pat Cummins is also missing, although Umesh Yadav’s selection of both Chennai openers’ wickets compensated for his absence. In their season opener, Kolkata played only three outside players but triumphed handily as their bowlers, headed by Umesh Yadav, delivered when it was most required.

Punjab’s new-look explosive batting got off to a flying start, chasing down Bangalore’s 205 with an over to spare. Punjab won their first match after chasing down a high total of over 200 on a decent batting surface. All of their specialist batters attended, with Shahrukh Khan and Odean Smith putting the final touches on the proceedings.

Odean Smith was named Player of the Match for his 8-ball 25 that helped his side win. He had a bad day with the ball, giving 52 runs in four overs, but he made up for it with a game-winning cameo.

Wankhede Stadium’s batting surface has always been favourable. The track has a consistent bounce, and the shorter boundaries make the hitters’ work even simpler. There will be a lot of dew, so after winning the toss, both sides will prefer to bowl first. Wankhede Stadium is known for its high-scoring games because of its lightning-fast outfield.

Shreyas Iyer, the team’s captain, is a right-handed batter from Kolkata Knight Riders. He’s already hit 33 runs in this tournament, and he has the potential to do it again here.

Kolkata Knight Riders’ Andre Russell is a right-handed batsman and right-arm fast bowler. So far in this competition, he has scored 25 runs and taken one wicket. He’ll be aiming to make it big in this town.

Punjab Kings’ Shikhar Dhawan is a left-handed batter. In the previous game, he hit 43 home runs. He’ll be a key player in this match once again.

Punjab Kings’ Mayank Agarwal is a right-handed hitter. In the previous match, he smashed 32 runs. He’ll be one of the most popular fantasy options for this matchup.

Punjab Kings’ Bhanuka Rajapaksa is a left-handed wicketkeeper-batsman. He racked up 43 runs in the last game and will be looking for a repeat performance today.

Suggested Playing XI No.1 for Kolkata vs Punjab MyTeam11 Team:

Suggested Playing XI No.2 for Kolkata vs Punjab MyTeam11 Team: