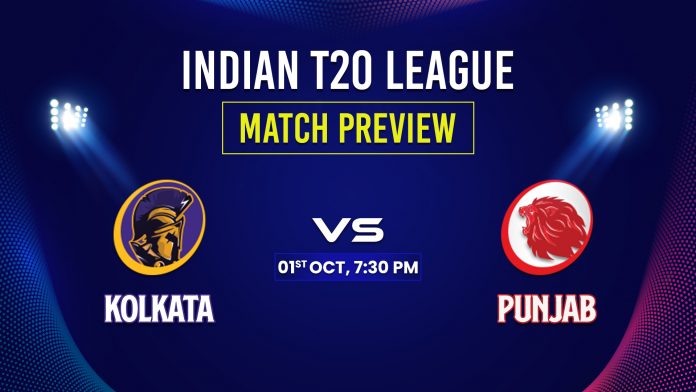 Kolkata and Punjab will face each other in the Indian T20 League on Friday, 1st of October. It is a must win for both the teams to stay alive in the competition. The match will take place in the Dubai International Stadium.

Kolkata's performance in the first leg of the league was not very substantial. But in the second leg, they have won three of the four matches played and that too in a spectacular way. Having played 11 matches, Kolkata is currently among the top-4 with 10 points. Kolkata had defeated second-placed team Delhi in the tournament in their last match. They restricted Delhi on just 127 runs and successfully chased down the target.

Skipper Morgan is doing a good part on the leading front but his form is a matter of concern for the team. Apart from him, Lockie Ferguson and Andre Russell will miss the match due to injury and won't be able to contribute anything. Venkatesh Iyer has strengthened Kolkata's top order. Nitish Rana and Rahul Tripathi are also expected to strengthen middle order.

Punjab team has not been at their best in this season so far. Punjab could only manage to register just 4 wins out of the 11 matches played, having lost 7 of them. With 8 points, Punjab is sitting on the sixth place on the points table. From here, if they have to make it to the playoffs, they will have to win all the remaining matches, not only win but also win with a huge margin to fix their net run rate. Punjab's batting mostly depends on its openers KL Rahul and Mayank Agarwal.

Punjab's bowling order has done a better job than the batsmen. Ravi Bishnoi, Mohammed Shami, Arshdeep Singh and Nathan Ellis have done a great job. Bishnoi in particular has been phenomenal and fans will expect more from him in this match.

The Dubai pitch has good pace and the ball comes on the bat very well. The batsmen can play big shots here and score good in this stadium. Any score above 170 will be a good target for the chasing team.