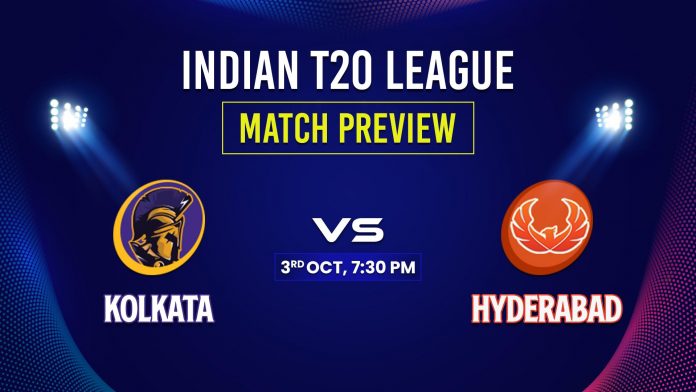 Kolkata will take on Hyderabad in the 49th match of the Indian T20 League. The match will take place in the Dubai International Stadium on Sunday, 3rd of October. While Hyderabad has nothing to lose in this league whether they win or lose, on the other hand Kolkata’s loss might wash off their playoff chances.

After playing 12 matches, Kolkata has 10 points on the table. Mumbai, Punjab and Rajasthan too have the same points but Kolkata’s impressive net run rate of 0.302 places the team on the fourth position above its contenders.

Kolkata’s best asset, Venkatesh Iyer had nothing but the best season as he has managed to score runs on a consistent basis and more than that he has been phenomenal with the ball too. Even though they lost their previous match against Punjab, which was mostly because of the poor performance of the fielders and a few catch drops, the team fought till the end but Rahul’s men were one step ahead. So Kolkata will not settle for a losing streak and they will have to ace their fielding in this match to make it to the playoffs.

Hyderabad played their last match against Chennai and suffered an insulting loss. They are struggling to get runs in their batting order and bowling too hasn’t been very successful.

The maximum and minimum temperature in Dubai will be 38 and 29 degrees respectively. With a humidity of 77 percent the weather will be hot and humid.

Dubai’s pitch hasn’t changed much since the league started and we would still see pacers struggling with variations in their bowling. This batsmen-friendly pitch will give some support to the spinners.