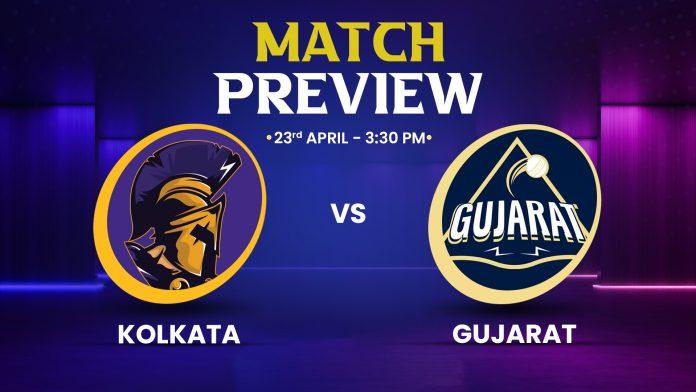 Half-way through the Indian T20 League, the points table is becoming a real concern for the teams. Kolkata and Gujarat will meet each other for the 35th match of this year’s tournament. Kolkata lost their last match against Rajastjan and are currently at number 7 at the points table. Meanwhile, Gujarat is enjoying its time at the number 1 spot at the points table.

Even though Kolkata has had some of the best matches of the tournament so far, the team is currently at the bottom half of the points table. In the last match, Kolkata suffered a last-over defeat from Rajasthan. Skipper Shreyas Iyer stepped up to the mark and hit 85 runs. However, the team’s efforts went in vain  because of the attacking Rajasthan.

Playing in the Indian T20 League for the first time, Gujarat has really impressed the fans as the seat is on top of all the teams at the points table. Hardik Pandya’s impressive performance with bat and bowl has really troubled the opposition. Youngster Shubhman Gill defied all the odds and has hit 239 runs so far in the tournament. Surely, Gujarat would like to use their momentum for their next match.

This season the defending teams have won more games than the chasing teams on this pitch. If a team can post a respectable total batting first, there is a good chance to defend the target as well. However, it is a night game and the dew factor will play an important role in the game.

The weather for April 23rd is predicted to have clear skies. However, the dew factor will come into play in the later stages of the match.

All-rounder Andre Russell absolutely butchered the bowlers at the start of this season, In the match against Punjab, he scored 70* runs and hit eight gigantic sixes.

Pat Cummins is a right-handed player from Kolkata. Traditionally, he is a right-arm pacer and uses the new bowl very well. However, the 28-year-old Australia can hit mighty sixes like nobody’s business.

Umesh Yadav is a right-arm fast bowler for Kolkata. Currently, he is the most wicket-taker from the Kolkata side with 10 wickets. Even though he is a fast bowler, the economy of Umesh Yadav has been impressive.

Shubman Gill is a Gujarati right-handed batsman. He’s already hit over 200 runs in this tournament and will be one of the safe bets for this game.

Lockie Ferguson is from Gujarat and is a right-handed batsman and right-arm fast bowler. He has so far taken 8 wickets in this competition and can once again play a key role with the ball in this game.

Suggested Playing XI No.1 for Kolkata vs Gujarat MyTeam11 Team:

Suggested Playing XI No.2 for  Kolkata vs Gujarat MyTeam11 Team: