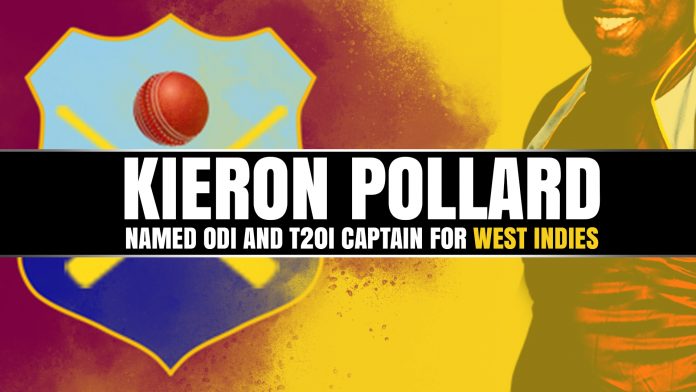 West Indies Cricket Board (WCB), over the years, have surprised everyone with the inclusion and exclusion in the squad. The last couple of years haven't gone their way as Jason Holder-led side failed to lead the side from the front. Seeing the dynamics and next year's ICC World Cup 2020, the management has picked Kieron Pollard to lead the side in white-ball format.

The 32-year-old Pollard has been able to make a name for himself in the franchise-based T20 leagues around the globe. He has also led the franchises like Mumbai Indians for a short span of time. Pollard is generally known for his hitting skills but knows well to control the situation and has been able to turn things in the team's favour on a few occasions.

Kieron Pollard last played an ODI game against Pakistan at the Sheikh Zayed Stadium in 2016. Ever since then, he was constantly overlooked by the selectors even though he performed well at times. Furthermore, he was ignored for the World Cup 2019 as well and was no way in contention to make it into the ODI team any time soon. However, the WICB decided to name his the skipper for this format as well as for the T20I format. This means that he will be replacing Carlos Brathwaite as the leader of the team in the shortest format of the game.

Thus far in his career, Kieron Pollard has featured in a total of 101 ODI matches. He scored 2289 runs at an average of about 26. The veteran cricketer has got 3 centuries and 9 half-centuries to his name. Moreover, he also played 62 T20Is where he scored 903 runs. When given the leadership for a game in IPL 2019, he was highly impressive and led the Mumbai Indians from the front.