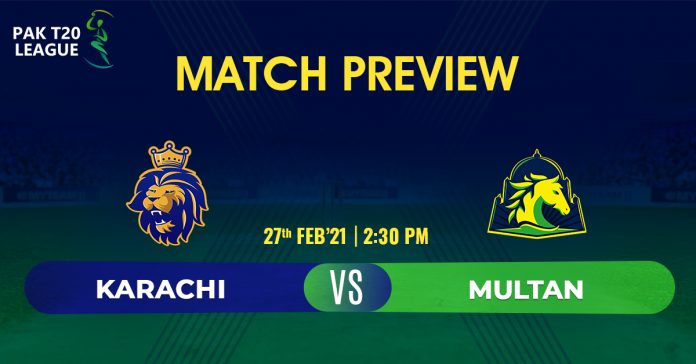 Multan will take on defending champions in the afternoon clash of Pak T20 League 2021. Karachi lost to Islamabad in the last outing, while Multan earned their first victory yesterday against Lahore.

Pak T20 League 2021 have one more double-header on Saturday and Multan will play back-to-back games. After losing the first two games in a close finish, Multan needed a win on Friday and they did a good job by restricting Lahore on 157 after a solid knock from Hafeez. Mohammed Rizwan scored a fine half-century to lead the chase after losing two wickets in the powerplay. Rizwan and Mqsood took the charge and crossed the line for Multan. It was the first victory for Multan under Rizwan and this time, they looked like a complete side.

Maqsood got runs in the last game which is a good sign for them and Rizwan’s form is already a big thing for Multan. He got his second half-century from three matches. Chris Lynn’s poor numbers are hurting them in top-order and Multan can look for another option. The Bowling unit was also better as they restricted the opponent on a good score considering the behaviour of the pitch. Toss will be a key factor but Multan would look for back-to-back victories here.

Meanwhile, Karachi started the season with a dominating victory but suffered a shocking defeat to Islamabad despite scoring 196 while batting first. Sharjeel Khan smashed the first century of the season and he put a record 176-run stand with Babar. Sharjeel started very slow but after smashing four straight sixes to Shadab Khan, the left-hander fired with the bat. Islamabad lost two wickets on just 13 but collective hard-hitting from Alex Hales, Iftikhar and Talat assured two points for Islamabad. Karachi lost their game in powerplay when they conceded 77 runs and scored just 33 in the first innings.

Babar took 56 balls to score 64 when they had wickets in hand. The poor strike rate cost 15-20 runs to Karachi. They have a compact side but lack of maturity hurt their chances. Nabi was introduced late despite knowing that Nabi is effective with the new ball. Imad Wasim has to fix these problems. Aamer Yami conceded 29 runs against Alex Hales and this one over also allowed Islamabad to dominate. Too many talking points from the previous defeat will surely give Karachi to reform the unit and they would aim for a good comeback in this match.

Karachi’s track is a batting paradise. It offers a good amount of assistance to batsmen. Chasing sides have never lost a match this season. Spinners have a slight edge in middle-overs.