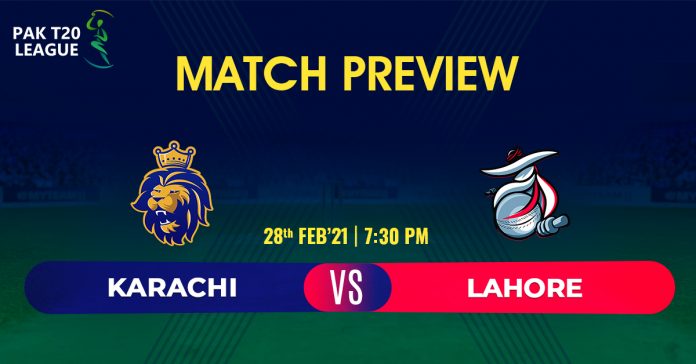 Last season’s finalists Karachi and Lahore, will face each other in the Sunday encounter of Pak T20 League 2021.

Karachi and Lahore will lock horns for the third time between four months. The last they played each other in the final of Pak T20 League 2020, Karachi emerged winner and claimed their maiden title. They also appeared in a thrilling super-over, and Karachi had the last laugh.

Defending champions are on a winning track, and they improved their mistakes after a shocking defeat to Islamabad in a high-scoring affair. They won the important toss, and Multan took charge from the very first over. Karachi showed a comeback in death-overs. At one stage, Multan were one down on 121 with losing just one wicket in 11 overs, and they scored just 75 in the next 9 overs. Sharjeel went early, but Babar Azam looked solid, and he played a sheet-anchor with a better strike rate. Joe Clarke also contributed in the chase, and Karachi walked away with two points. Karachi has a solid balance, and they have to keep this chasing trend in mind. Toss is not in their hand, but if they better their acceleration, it would help them post a big total. In the last match, Imad tried six bowlers, but the bowling unit is still not offering the balance with the batting unit.

Meanwhile, Lahore made a perfect start by winning the first two games against Peshawar and Quetta. In the last outing, they lost the toss and eventually lost the match as well. On a pure batting wicket, Lahore managed to score 157, and Multan chased down this total with ease. The acceleration was missing for Lahore when they were three down on 106. After picking two early wickets, Lahore allowed Maqsood and Rizwan to get settle. Lahore would look for revenge of the last year’s loss in the final. Mohammad Hafeez is having an extra-ordinary form with the bat, and Lahore have good strength in batting. Samit Patel is providing assistance in middle-order with both bat and ball. Sohail Akhtar-led side also requires the best game from its bowlers. They have two quality T20 bowlers, Shaheen Shah and Haris Rauf, and Ahmed Daniyal has also provided the base along with these experienced players.

Karachi’s track is good for batting, and there is no help to pace and spin. It gets better when the match progresses. Batting in the second innings would be quite easier like we have seen in previous games. 200 isn’t safe on this pitch.