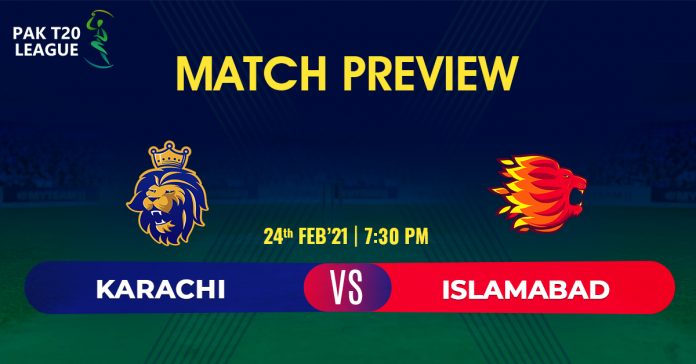 Karachi and Islamabad will face each other in Pak T20 League 2021 on Tuesday night. Defending champions have a good team combination and under Imad Wasim, Karachi is in great form. In the first outing, Karachi edged past Quetta by 7 wickets. It was a comfortable chase for Karachi after showing great bowling skills. Quetta were bowled out on just 121 and Arshad Iqbal scalped three wickets, conceding just 16 in four overs. Joe Clarke played a fine inning while chasing. The Englishman scored 46 off just 23 balls to se the tone and Mohammed Nabi provided the finishing touch with 14-balls 30. Karachi chased down the target with 37 balls spare and with losing just three wickets.

Babar Azam and Sharjeel Khan are the best opening pair, followed by Joe Clarke and Colin Ingram at number three and four. They have two match-finishers Nabi and Christian. Daniel Christian was in tremendous form in Australia T20 League 2020-21. Skipper Imad Wasim can play any role at number 7. They have loopholes in the bowling unit only but they performed better against Quetta in the season-opener. Experienced Amir conceded just 14 in 4-overs with picking one wicket. Arshad Iqbal and Waqas Maqsood have also impressed.

Meanwhile, Islamabad also made a good start in Pak T20 League 2021. Two-times winner suffered issues while chasing but Lewis Gregory rescued them with 31-balls 49. Islamabad restricted Multan on 150 despite the heroics from Rizwan and in the chase, Multan picked 6 wickets on just 74. The required run rate was in control and it allowed Gregory to attack. They would avoid such collapse in the next matches. Islamabad have a strong batting unit.

Alex Hales are in the form of his life and he would be a big game-changer at the top. Local players Hussain Talat, Asif Ali, and Iftikhar Ahmed have to bat very well in middle-order. Faheem Ashraf has been pretty consistent from the last couple of months and Shadab Khan would expect some fire from him. The bowling unit is leading by Hasan Ali and his numbers will also affect the game. Islamabad are the top side but they rely more on local players. If local players perform better, they would be a dangerous side.

Karachi’s track is good for batting and we saw good scoring last night when Peshawar chased down 194. Pacers can get help from the pitch with the new ball. The surface is getting better for batsmen with each day. Chasing sides have won all the matches so far and toss will be important.