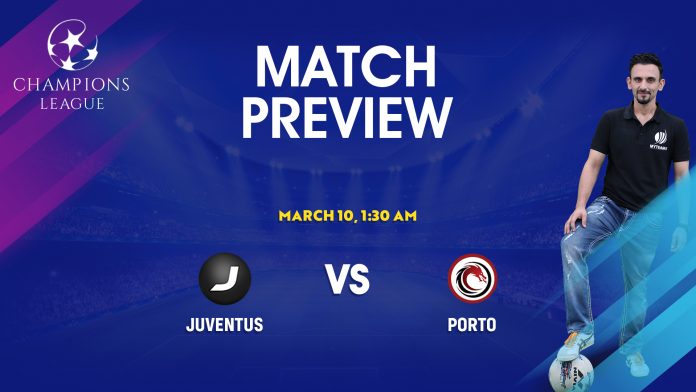 Juventus will host Porto in the crucial round-of-16 second leg game of Champions League 2020-21. Porto claimed the win in the first leg game at home and the Serie A club would look to outplay the Portuguese club tonight.

The second leg games of the round-of-16 Champions League 2020-21 kick off with a big game between Juventus and Porto. The Portuguese champions surprised Ronaldo’s Juventus in the first leg game and the pressure is on the Italian Club. The home side took the lead inside just two minutes through Mehdi Taremi and another strike from Moussa Marega secured a one-goal advantage over Juventus.

Porto are now unbeaten in the last six matches in European competition. They finished second behind Man City in Group C and made into the round of 16 for the fourth straight time. Sergio Conceicao's side are not in a good position to retain their trophy in Portugal’s top flight. Dragon are also on the verge of losing the title this season. They are 10-points behind Sporting in Primeira Liga 2020-21. They have lost just one game in the last 25 league games and the defeat came against Sporting last month. Porto are coming off a defeat in 2nd leg semifinal with Barga at Taca De Portugal, before winning the domestic game against Gil Vicente 2-0.

Meanwhile, Juventus are in big trouble. They are already out of the contention for the title in Serie A 2020-21. Andrea Pirlo's side are 10 points behind league-leaders Inter Milan and stands at third in the points table. The current form can push them for a comeback tonight. The Serie A champions conceded only six goals in their last thirteen games in all competitions. They are playing at home and Juventus have won their last seven home matches in Serie A and scored at least twice on each occasion. Federico Chiesa netted a goal in the 82nd minute to reduce the goal margin in the first leg and Juventus cannot even afford a draw here. If they win with a one-goal margin, the match will go in extra-time and it will be decided on away goals.

Giorgio Chiellini and Matthijs de Ligt are the clear absentees for Juventus. Leonardo Bonucci and Arthur both came off the bench against Lazio on Saturday and Juan Cuadrado was also fit. Rodrigo Bentancur tested positive for COVID-19 last week. Defender Danilo will also miss the game. On the other hand, Pepe and Jesus Corona both returned from Barcelos and suffered injuries. Chancel Mbemba is likely to miss this game for Porto. Ivan Marcano will also sit on the bench due to a fitness issue.