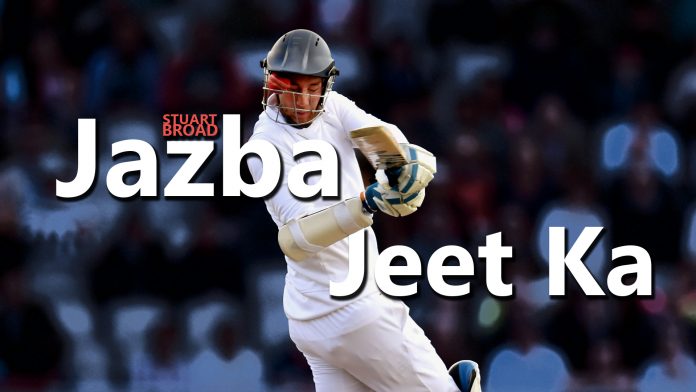 The stage was set. The skies over Old Trafford had cleared. The spectators were on their feet – cheering for their home team and Stuart Broad – who was then seen as a bowling all-rounder was at the crease. In 2014, Stuart Broad was at his supreme best with the ball and was even contributing 30s and 40s very frequently in the Test matches.

It was then, Broad was known for clocking 140-145 kph regularly and disturb batsman’s line. Sometimes, in his career, he has been so effective that batsman used to leave the good length ball which was going outside off. However, on the third day of the fourth Test, Broad experienced for what he is known for – ‘producing lethal deliveries’.

In the first over after lunch today, Broad hit Varun Aaron for consecutive sixes off short deliveries which weren’t express pace.

However, on the third ball of the over, Stuart Broad suffered a nasty injury on his forehead after a Varun Aaron bouncer pierced through the gap in his helmet and hit above his eyes. Blood was dripping off Broad’s head as he fell towards the ground.

It’s now a known fact that Broad is uncomfortable against the bouncers and India thought of testing him with just that. Varun Aaron bowled the first bouncer and it was pulled for six. Aaron persisted with the short ball and it once again ended up in the stands. The third bouncer bounced a bit more and the ball went through the gap in his helmet and hit in the centre above the two eyes.

Blood was oozing out of the forehead as he was treated by the team doctor and minutes later walked back. In the process, Broad had done enough with willow and red cherry for the team to be on the winning side. Eventually, the three lions emerged victorious with Stuart Broad being adjudicated as the man-of-the-match.

He scalped six wickets for mere 25 runs in the first innings and 12 runs with the bat before getting retired hurt, which eventually had put the Indian team on the back foot and they never really recovered from it. The England team finished five-match Test series with a scoreline of 3-1.